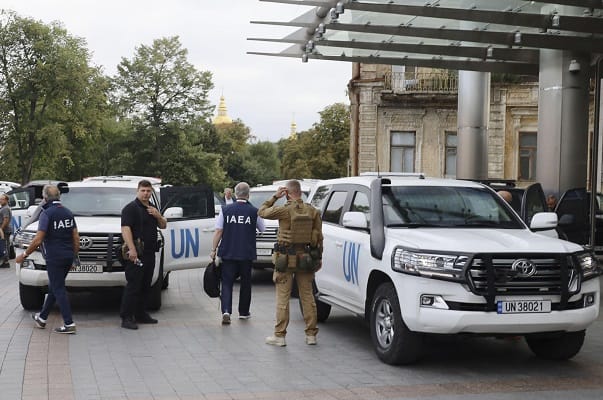 The International Atomic Energy Agency (IAEA) are now in Ukraine and their official and agreed route with Moscow has been hit by Russian strikes in an attempt to preven them from inspecting Europe’s largest nuclear power plant.

to inspect any damage and to asses that there is no chance there could be a radiation leak.

This clearly demonstrates Russia’s real “interest” over the agreed inspection, to inspect any damage and to asses that there is no chance there could be a radiation leak.

Adviser to the Head of the Office of the President of Ukraine Mykhailo Podoliak said on Thursday, “Russia demonstratively strikes on Enerhodar, along the IAEA mission official route. To blame it on Ukraine.

The @iaeaorg mission went from Zaporizhzhia to Enerhodar (where the nuclear plant is) despite shelling.

5th energy block stopped working on the plant because of shelling. 6th is still working.

“This is a demonstration of RF’s real “interest” in the inspection. This is yet another proof of Russian “guarantees” true importance for any intermediaries.”

There are eight members the IAEA team who were expected to arrive at the Zaporizhzhia nuclear power plant on Thursday morning.

For the last 2 hours #Russia artillery attacks have been targeting the itinerary of the @iaeaorg mission from Zaporizhzhia to Energodar. The 5th energy bloc of the largest nuclear plant in Europe has switched off as a result of damage. The mission continues though

The emergency system of Zaporizhia facility has turned off one of the two operating power units, after more shelling by the Russian forces.

Energoatom said on Thursday morning, “Today, on September 1, 2022, at 4:57 a.m., as a result of another mortar attack by the Russian occupation forces on the territory of Zaporizhia NPP, the emergency system was triggered and the operating power unit No. 5 was switched off.”

Also, the ZNPP-330 kV backup power line for auxiliary needs was damaged and in the transitional mode, there was a blackout of the non-operating power unit No. 2 with the launch of diesel generators, Energoatom added.

The nuclear power company stressed this is the second time in the recent ten days when “the criminal actions of the Rushists caused the power unit switch off and a blackout at power plant.”

Despite Moscow previously saying they welcome the IAEA to visit the facility the head of the Russian-appointed local administration said on Wednesday they are now only “allowed to visit for one day.”

“The programme of the visit is designed for one day. They must see the work of the station in one day,” Yevgeniy Balitsky said, adding that they will be shown shrapnel of alleged Ukrainian shells.

Podoliak said on Wednesday, “Russia is deliberately shelling corridors for IAEA mission to reach ZNPP. All to offer passage through Crimea/ORDLO.

“Ukraine’s position is the same.

“Access only through controlled territory of Ukraine. Nuclear power plant demilitarization. Russian troops withdrawal. Only Ukraine’s personnel at the station.”