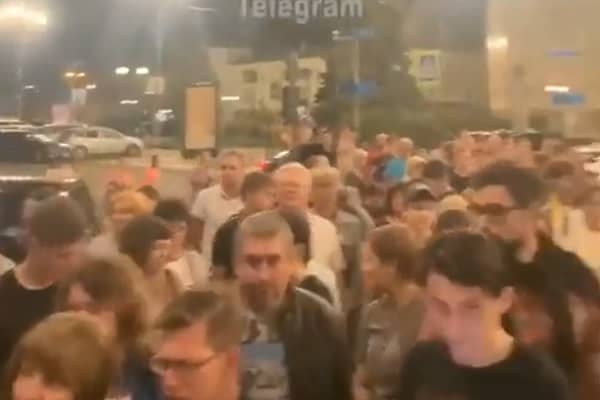 Russians citizens are frantically trying to flee Belgorod after multiple airstrikes rocked the city with giant fireballs seen high in the sky.

Belgorod is 25 miles from the Ukrainian border and long queues could be seen where hundreds of Russian citizens some with suitcases were trying to flee on trains at the railway station.

A foreign policy expert wrote, “Russians are fleeing Belgorod as explosions rock the city and air defence activity lights up the sky.”

Vladimir Putin has been called “an idiot” and the history books will remember him for “the demise of Russia.”

Writing on Twitter, Igor Sushko said, “Belgorod is located 25 miles from the border with #Ukraine.

“The population is frantically trying to flee to inland Russia after multiple reported strikes.

“Putin is an idiot. History books will place the responsibility for the demise of Russia squarely on him.”

One such strike in #Belgorod was caught on camera. You can also hear helicopters. pic.twitter.com/hEnL9aKcDQ

He later posted a video that appeared to show a missile hitting the area, he wrote alongside the video, “One such strike in #Belgorod was caught on camera.

“You can also hear helicopters.”

“Around the same time, videos and photographs of giant queues at the railway station began to appear.”