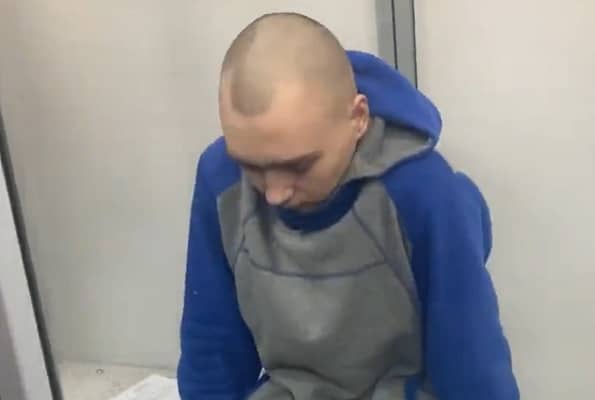 Sgt. Vadim Shyshimarin, 21, is accused of shooting dead a 62-year old man through a car window he “fired several aimed shots” shooting him in the head with a Kalashnikov assault rifle in the Sumy region whilst he was on his bicycle.

On Wednesday the Russian soldier pleaded guilty in court to committing a war crime in Kyiv district court in a landmark trial.

The guilty plea is significant because this now demonstrates that war crimes are and have been committed by Russian forces since the invasion started on 24 February.

Vladimir Putin and the Kremlin has repeatedly denied that their forces are committing war crimes in Ukraine.

The Russian soldiers faces life in prison and the Ukrainian government has accused Russia publicly of committing more than 10,000 possible war crimes.

International Criminal Court (ICC) are also investigating for alleged war crimes in the opening phases of the war.

Venediktova said, “The first Russian military will stand trial for killing a civilian in the Sumy region.

“The Office of the Prosecutor General filed an indictment against the commander of the unit of unit 32010 “4th Panzer Kantemirov Division of the Moscow Region” Vadim Shishimarin.

Russian Sgt. Vadim Shyshimarin stands accused of shooting a 62-year-old man in the head in the northeastern village of Chupakhivka, Sumy region on Feb 28.

“The investigation established that on 28, February this 21-year-old Russian soldier killed an unarmed resident of the village of Chupakhivka, Sumy region, who was riding a bicycle along the roadside.

“Before that, the column, which included Sergeant Shishimarin, was defeated by our Armed Forces.  “While fleeing, he and 4 other employees fired at a private car and seized it. The invaders drove into the village in a stolen car with punctured wheels.

“On the way they saw a man returning home and talking on the phone.

“One of the soldiers ordered the sergeant to kill a civilian so that he would not report them to Ukrainian defenders.

“He fired several shots through the open window of the car from a Kalashnikov rifle at the head of the 62-year-old victim. The man died on the spot just a few dozen meters from his home.

“The suspect Shishimarin is currently in custody. Prosecutors and SBU investigators have gathered enough evidence of his involvement in violating the laws and customs of war, combined with premeditated murder (Part 2 of Article 438 of the Criminal Code of Ukraine.

“For these actions he faces 10 to 15 years in prison or life imprisonment.”