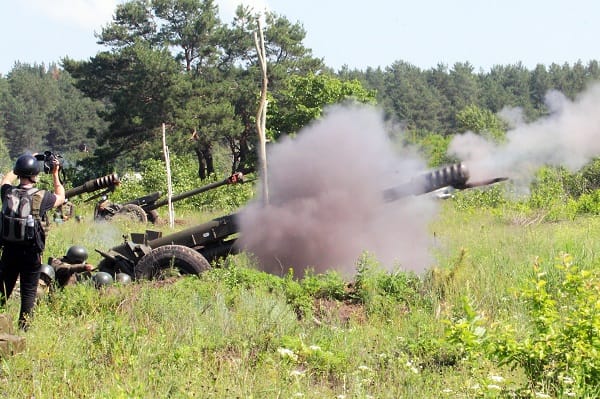 In the Ukrainian city of Tokmak three Russian S-300 anti-aircraft missile systems where blown up on Wednesday, the General Staff of the Armed Forces of Ukraine confirmed on Thursday.

“Up to 150” people were “killed” as a result of the attack and the Ukrainian military have reported that there is “extremely low morale” amongst Russian troops.

Vladimir Putin’s war is failing and according to the Ukrainian ambassador Vadym Prystaiko Russian conscripts are “eager” to surrender as literally hundreds are calling the “special hotlines” to quit and seek safety.

Ukrainian military reported, “In the Kherson region, as a result of targeted fire damage in the area of Tokarivka, the enemy’s losses amounted to up to 150 people killed.

“Due to such cases, the soldiers of the occupying army have extremely low morale.

“They often desert and ignore orders, especially when mobilised.”

Broadcaster Julia Hartley-Brewer asked Prystaiko, “Has there been any effect yet, have they turned up? Is that going to change the fortunes of the war?”

Mr Prystaiko told Talk TV: “They have not arrived in numbers yet, I guess they’re just coming through the training courses very fast.

“Which will allow them to understand which side of the Kalashnikov the bullets are coming out, most of these people are not young per se.

“Some of them are extremely too old and unfit for the service and unmotivated.

Prystaiko added: “So, these people they’re coming to Ukrainian frontlines.

“And we have a couple of hundred of them already, it’s not thousands yet, but hundreds.

“Some of them were to get to Ukrainian captivity, they would call the special hotlines which we established to tell people you still can survive.

Also Putin had released a notorious underworld gangster from prison who was serving an 18 year prison sentence and he enlisted and was sent to the frontline fighting the Wagner private military company.

Telegram channel VChK-OGPU has reported that the prisoner, Zaur Aliyev who was nicknamed Zaika or rabbit tried to flee the frontline.

The source said that he had “decided to run away,” and said “fighters [are] quickly caught Aliyev and he was shot.”

“He had been serving a long term, signed up for the Wagner PMC and was killed by Prigozhin’s men while trying to escape,” reported the channel.

“You’ll be taught what to do regarding surrender. The second sin is alcohol and drugs in the war zone.

“The third sin is marauding – this includes sexual contacts with local women, men, flora, fauna, anyone.

Last month, Prigozhin was filmed recruiting prisoners in the Mari El Republic, 450 miles east of Moscow and promised the prisoners that “nobody goes back behind bars” if they fight with the Wagner group.

He added, “If you serve six months (in Wagner), you are free.”

In a blunt warning, Prigozhin said, “If you arrive in Ukraine and decide it’s not for you, we will execute you.”