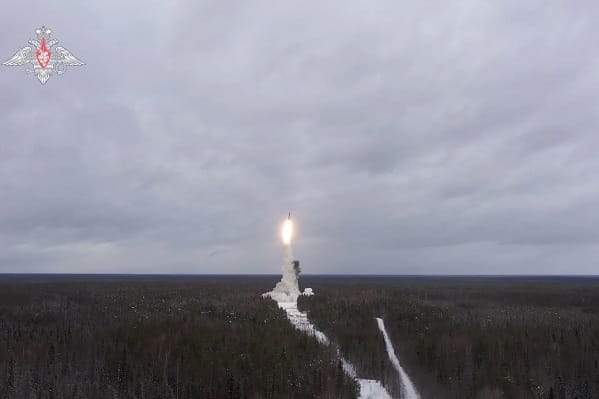 Vladimir Putin has announced that his new “Satan II” nuclear Intercontinental Ballistic Missile (ICBM) is “can break through all modern defences” and will be ready “by autumn” and will be aimed at “Britain.”

A Russian MP warned that they “can carry out a nuclear strike against Great Britain without consultations with NATO.”

Western intelligence and military experts have said the new nuclear weapon can carry 10 nuclear warheads with decoys and fears of a catastrophic nuclear war has increased since the start of the Ukraine war.

Last week Putin hailed the development of the missile as “a big, significant event” for Russia’s defense industry.

The Russian President said the Sarmat will “ensure Russia’s security from external threats and make those who try to threaten our country with aggressive rhetoric think twice.”

He added, “The missile can break through all modern anti-missile defences.

“There is nothing like this anywhere in the world, and won’t be for a long time.”

A Russian MP issued a sinister death threat on Kremlin state controlled TV against the British Prime Minister Boris Johnson and warned that Britain is now their “prime target.”

Last month United Nations Secretary-General Antonio Guterres warned, “The prospect of nuclear conflict, once unthinkable, is now back within the realm of possibility.”

The RS-28 Sarmat has been designed to replace the R-36, which was nicknamed SS-18 Satan by NATO.

Russia’s Defence Ministry said, “Sarmat is the most powerful missile with the longest range of destruction of targets in the world, which will significantly increase the combat power of our country’s strategic nuclear forces.”

‘By the time they [the West] find an antidote, we must have found another solution to this. And today we are working on it. There are developments, there is work in progress.

Jack Watling, of the Royal United Services Institute defence think-tank said the timing of the announcement is pure posturing by Putin ready for Russia’s Victory Day on 9 May.

“The timing of the test reflects the Russians wanting to have something to show as a technological achievement in the lead-up to Victory Day, at a time when a lot of their technology has not delivered the results they would have liked in Ukraine,” he said.