Home Business News Putin warned ‘that nothing is off the table’ as the UK could send Challenger 2 tanks to Ukraine, enough to equip a squadron 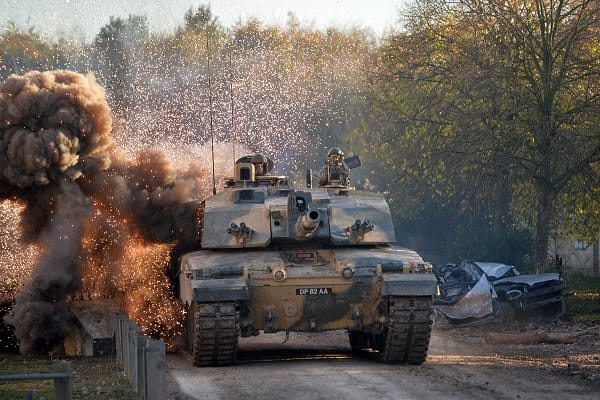 The UK are reportedly considering sending ten Challenger 2 tanks to Ukraine which would be enough to equip a squadron, which sends a very clear message to Vladimir Putin “that nothing is off the table.”

According to a source, discussions have been ongoing “for a few weeks” and should this happen, it would be a major step for Western support for Kyiv.

Germany has also hinted that they could send the deadly Leopard II tanks to Ukraine, Sky News reported.

Colonel Hamish de Bretton Gordon who is the former commander of 1st Royal Tank Regiment, said this could “tip the balance” of the war for Ukraine which would cause mayhem for Russia on the battlefield.

He added, “Strategically this sends a very firm message to Putin that nothing is off the table.

“Challenger 2 and Leopard II are modern tanks. They are much better protected, more reliable, quicker.”

Moscow warned that if the West sends tanks to Ukraine, then this will “deepen the suffering of the Ukrainian people.”

Moscow and top brass within the Russian military will be very concerned over this news as currently their troops are using old Soviet era T-72 tanks which are no match for modern day Western main battle tanks.

The British Ministry of Defence (MoD) spokesman said, “The government has committed to match or exceed last year’s funding for military aid to Ukraine in 2023, and we will continue to build on recent donations with training and further gifting of equipment.

“We have provided over 200 armoured vehicles to Ukraine to date – including Stormer vehicles armed with Starstreak missiles.

“We have also donated tens of thousands of items including helmets and body armour, mobility and logistics vehicles, anti-tank weapons, air defence missiles and systems, winter and medical equipment.”

The US have announced that they are going to provide Ukraine with game changing “high-precision” weaponry in what has been described as a “very powerful” military aid package.

The Biden administration announced another military aid package worth more than $3.75 billion which will assist not only Ukraine, but other countries who are affected by Moscow’s aggression in Europe.

The US are to send “Bradley armoured vehicles” which are known as “tank killers” as they carry two of the deadly BGM-71 TOW anti-tank missiles and also fire 25 mm M242 Bushmaster chain gun, which fires up to 300 rounds per minute and are accurate for up to two miles.

President Zelensky added, “For the first time, we will get Bradley armoured vehicles — this is exactly what is needed.

“New guns and rounds, including high-precision ones, new rockets, new drones. It is timely and strong.”

President Zelesnky thanked President Biden saying, that “all the Americans who appreciate freedom, and who know that freedom is worth protecting.”