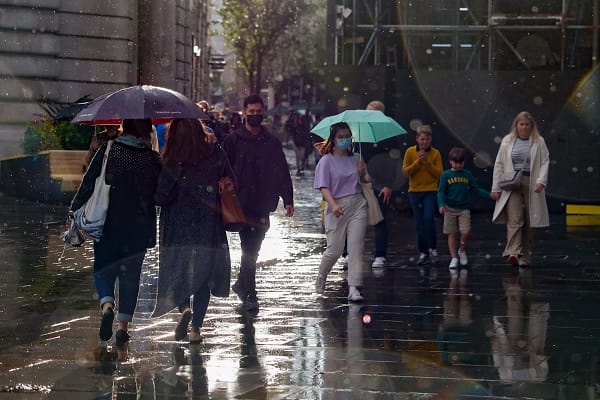 The Met Office has issued four yellow weather warnings for thunderstorms, lightening, hail and heavy rain across UK to hit on Wednesday afternoon.

Forecasters have said the yellow weather warnings are in place between 1pm an 8pm on Wednesday which will mainly hit northeast of England and Scotland.

The Met Office said, “heavy, slow-moving showers and thunderstorms are likely to develop during Wednesday afternoon.”

They warned that homes and businesses “could be flooded quickly, with damage to some buildings from floodwater, lightning strikes, hail or strong winds.”

They added, “Where flooding or lightning strikes occur, there is a chance of delays and some cancellations to train and bus services.

“Spray and sudden flooding could lead to difficult driving conditions and some road closures.

“There is a slight chance that power cuts could occur and other services to some homes and businesses could be lost.”

The forecaster said, “Following the clearance of overnight rain, this area is likely to see the development of slow-moving showers and thunderstorms this afternoon.

“Although many places will miss the heaviest showers a few places could see in excess of 30mm of rain in a couple of hours, possibly accompanied by lightning and hail, which would be enough to cause difficult driving conditions and localised surface water flooding.”

Met Office Deputy Chief Meteorologist Adam Thornhill said, “The low-pressure on Wednesday will bring showers to most areas of the UK, but the heaviest, slow-moving downpours are expected in northern areas, including Northern Ireland, with a chance of associated thunder and lightning.

“Although rainfall amounts are still open to some uncertainty, there’s a chance some areas in the north could see in excess of 20mm of rain within a 3-hour period.”

He added, “By the time Ex-Tropical Storm Alex gets near UK shores, it will have transitioned into a mature Atlantic low.

“Although it will have lost much of its strength, it will bring some unseasonably strong winds across the UK – especially to the northwest on Thursday and Friday.

“The track of the former storm currently looks to be grazing the far northwest of the UK on Thursday and Friday and, although the details are still being worked out, winds could be around 45mph for most in the north of the UK, with a chance of some gusts in excess of 55mph in some exposed northwestern island and coastal areas.”