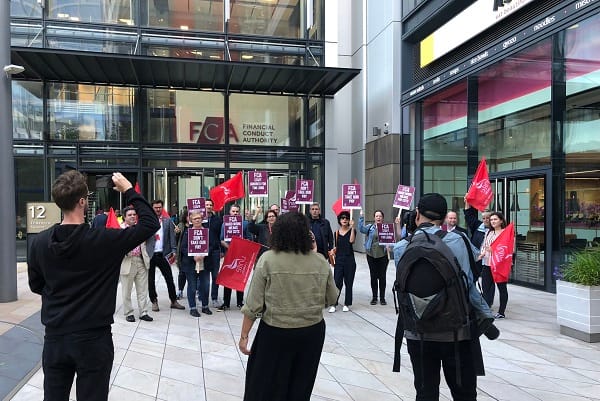 Staff at the Financial Conduct Authority (FCA) have walked out on Thursday for a 48-hour strike and have mounted picket lines over a fresh dispute over union recognition.

Members of the Unite union in London and Edinburgh walked out as the FCA is in “a deep crisis but it is a crisis of its own making.”

Since October an Freedom of Information request revealed that 1,000 employees have quit the FCA and there has also been 721 voluntary resignation.

Unite have claimed those figures from an FOI which we can’t find – we’ve run the figures again and its 721 between Oct 2020 and March 2022.  This is inline with our historical turnover.

The FCA told LondonLovesBusiness.com, “The vast majority of colleagues have decided not to strike and we are operating as normal. We acknowledge the decision by Unite members, however, and respect the strength of feeling of some colleagues about changes we have made.”

Unite general secretary Sharon Graham said, “The FCA is in a deep crisis but it’s a crisis of its own making.

“Unite is determined that this workforce does not pay the price for appalling management decisions, which is why our members are taking strike action because they want to be represented by their union.

“The FCA can restore confidence if it chooses to.

“It is very simple – they can work with Unite to improve pay, terms and conditions and accept the desire of this workforce to be represented by our union, or they can face ongoing strike action.”

Since May staff have been “working to rule” withdrawing overtime and additional work they currently do outside of their contractual duties.