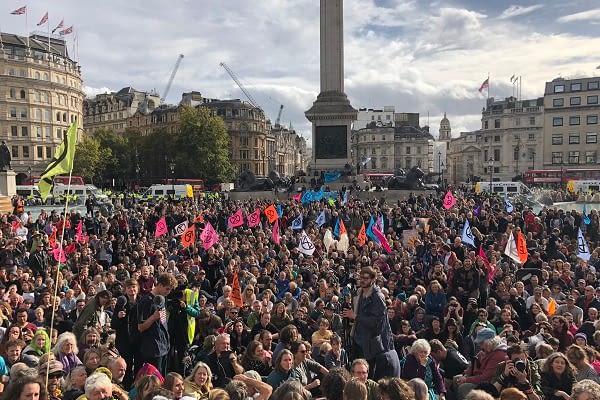 Some 2,500 Extinction Rebellion (XR) protesters have headed to Trafalgar Square in defiance of the Metropolitan Police’s questionable authority over the ban.

On Monday the Met Police imposed conditions effectively banning protesters from the streets on London, which has led to much questioning by legal experts and some politicians.

The police have threatened that anyone involved in the “autumn uprising” will face arrest. The Met Police went even further by adding, Under the “draconian” use of the Section 14 order, any assembly, a group of more than two people linked to XR’s Autumn uprising will be deemed by the police as unlawful.

A statement from XR said, “Following the decision to ban peaceful protest in London, we are calling on everyone to assemble in Trafalgar Square to defend our civil liberties.”

Deputy Assistant Commissioner Laurence Taylor said, “We are very confident that what we’ve done is entirely lawful, entirely proportionate in the circumstances, and we are completely comfortable with the position that we maintain.”

Taylor added that those who attend Trafalgar Square will be in breach of the Section 14 order.

He said, “We will take a balanced and proportionate response to whatever we’re faced with, as we have done since Monday.

“If people do assemble at Trafalgar Square, they are clearly in breach of the Section 14 conditions and are therefore liable to arrest.

“As with all policing we will review the situation and will make decisions that are appropriate to those circumstances. But people, if they gather there, are liable to arrest.”

The Met Police has faced fierce criticism over their Section 14 conditions by Amnesty International and human rights lawyers.

On Wednesday XR lawyers submitted an application for judicial review to the High Court at an urgent hearing.

A group of claimants Baroness Jenny Jones, Caroline Lucas MP, Clive Lewis MP, David Drew MP, Ellie Chowns MEP, George Monbiot, and Adam Allnut will bring an action on behalf of the group to challenge the Metropolitan Police’s blanket ban on XT being allowed to protest across the whole of London for the rest of the week.

Bindman’s Solicitors and Doughty Street Chambers are to advise over the challenge of the Metropolitan Police use of Section 14 of the Public Order Act to restrict the protests, saying the “ban is a disproportionate and unprecedented curtailment of the right to free speech and free assembly.”

Anti-Brexit barrister, Jo Maugham QC said the move by the Met Police was “a huge overreach” of police powers.

Police could investigate No.10 ‘BYOB’ lockdown party which could be...

Labour leader is ‘not in favour’ of Sadiq Khan decriminalising...