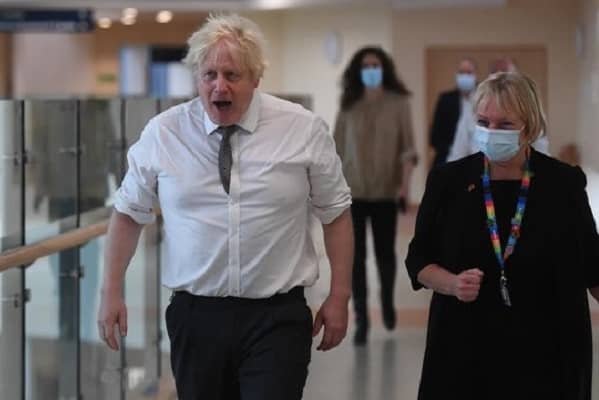 Boris Johnson has been delivered another bombshell, this time he has been accused of refusing to “isolate” despite having a cough just before he was diagnosed with Covid.

The Prime Minister has been accused of breaking his very own rules on self-isolation in March 2020, an insider has claimed.

Johnson tested positive on 27 March and was later admitted to intensive care at a London hospital.

On the 16 March the guidance said anyone who has a “new continuous cough” no matter “hoe mild” must self-isolate, Johnson dismissed the idea that he had the virus at the time.

In the days prior to Johnson going into isolation Downing Street have admitted that he was “commuting” between London and Chequers.

A government source told The Times that he was noticeably coughing noticeably prior to his formal diagnosis on 27 March.

The insider said, “He said he was ‘strong like bull’ and banged his chest.

“He was advised that he might have Covid but he rejected it.

“He had a really bad cough but he was walking round the office and holding meetings.”

Downing Street has not denied the claims and a spokesperson told The Times, “Appropriate measures were taken to ensure the PM was isolated.”

The PM’s official spokesman said, “I’ve seen those reports. As you’ll know the PM tweeted about that in March, saying ‘Over the last 24 hours I have developed mild symptoms and tested positive for coronavirus and [I’m] now self isolating’ and I don’t have anything beyond that.”

Pressed again, the spokesman said Johnson “acted in accordance with the rules at the time.”

Asked if the Prime Minister told people he was “strong like a bull,” the spokesman said, “I don’t recognise those words.”

Dominic Cummings claims that Johnson regarded the virus “as just a scare story” and then “described it as the new swine flu” in early 2020.

Just days ago, claims emerged that Downing Street staff made a makeshift “puppy gate” to keep Johnson, who has nicknamed himself “big dog” for breaking isolation.

“I remember we had to create a ‘cat run’ for him to get down from the flat to his office so he wouldn’t come into contact with people,” an insider said.

“The idea was we could talk to him through the open door. But he kept on coming out so we put two chairs across the door like some kind of puppy gate.

“There was a pattern throughout.

“He just simply did not think about following the rules.

“They were not for him.”