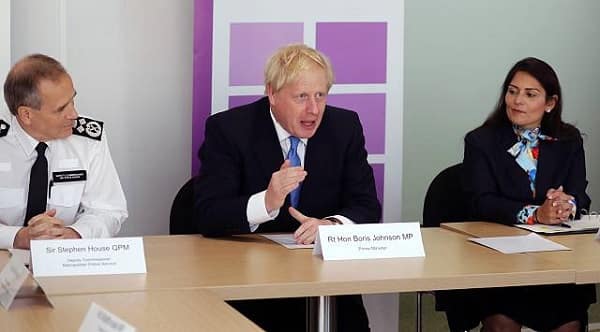 He said, “As I said on the steps of Downing Street this week, my job as Prime Minister is to make our streets safer.

“People want to see more officers in their neighbourhoods, protecting the public and cutting crime. I promised 20,000 extra officers and that recruitment will now start in earnest.”

The recruitment is to commence from September, and Johnson wants this completed over the next three years.

But, despite Johnson’s announcement the reality is the number of people searching for UK police jobs has fallen by almost a fifth over the last two years. Since December 2018 this has slumped by 25% alone.

Last week PC Outten was stabbed with a machete in Leyton, and over the weekend another police officer was run over and left for dead.

Assaults on the police is rising, and public opinion of the police and criminal justice system is at an all-time low, hence Johnson wanting to “rebuild the reputation.”

But, despite all the government’s plans, do people really want to be on the front line and join the police?

As the new government indicates plans to ramp up police recruits across England and Wales, interest in working for the force has declined sharply this year, according to new analysis by the world’s largest job site, Indeed.

Boris Johnson has announced plans to put an extra 20,000 police officers on the beat, a lack of willing recruits could make this difficult to achieve.

Indeed’s job search data shows jobseekers’ interest in working for the police is waning nationwide. London’s Metropolitan Police is the country’s largest force, with almost 31,000 officers, but searches for police jobs in the capital have dropped by 12.33% over the past two years.

The West Midlands (down 27.1%), Greater Manchester (down 6.15%) and West Yorkshire (down 7.06%) forces follow the same pattern, while Lancashire has seen the steepest decline, with a 28.9% fall in jobseeker interest since 2017.

In addition, the latest official figures show police numbers have declined steadily since 2010. 2018 saw the lowest police officer levels since 1981, and although 766 officers have been added over the past 12 months, over the past decade the net drop in police numbers across England and Wales is 20,597.

There are currently 123,171 police officers in England and Wales, meaning the new government drive is targeting a 16% increase to restore numbers to their 2010 levels, something that may prove difficult following such a sharp decline in jobseeker interest.

Bill Richards, UK managing director at global job site Indeed said, “Finding an extra 20,000 police officers would be a challenge at any time. But with the UK unemployment rate at just 3.8%, its lowest level for more than four decades, it’s likely to be even tougher. The tight labour market means all employers, including our public services, are having to fight hard to win each and every recruit.

“Police officers will get a 2.5% pay rise from 1 September 2019, but forces will still need to focus on selling the full range of benefits that police work brings. While it can be a challenging job with long and antisocial hours, police officers enjoy a unique sense of social responsibility, trust and respect as well as a relatively attractive pension.

“But with our data suggesting some jobseekers may need some convincing, it remains to be seen if the Government’s high-profile plan to boost the police ranks will spark a renewed wave of jobseeker interest.”