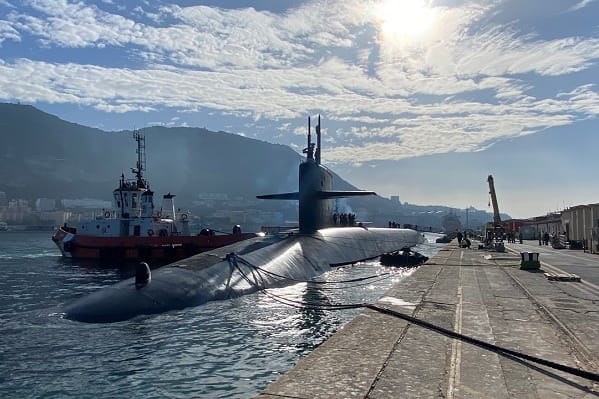 The World’s largest submarine the USS Rhode Island has docked at the port of Gibraltar which will send a clear message to the Kremlin and Vladimir Putin.

A senior US commander said this should be seen as “ironclad commitment” to their allies, and the British Armed Forces Minister James Heappey said Gibraltar’s bases are of “huge strategic importance.”

In a statement issued by the US Navy, Captain John Craddock, commander, Task Force 69, said, “Rhode Island’s port visit to Gibraltar reinforces our ironclad commitment to our allies and partners in the region.

“The US and UK share a strong history of cooperation, through exercises, operations, and cooperation activities such as this, that enhance our combined capabilities and partnership.

“The complexity, lethality, and tactical expertise of Rhode Island epitomises the effectiveness and strength of the submarine force.”

Heappey said on Friday morning at a reception hosted by the government of Gibraltar, “Because the bases in Gibraltar are of huge strategic importance, not just to the United Kingdom but to Europe as a whole.”