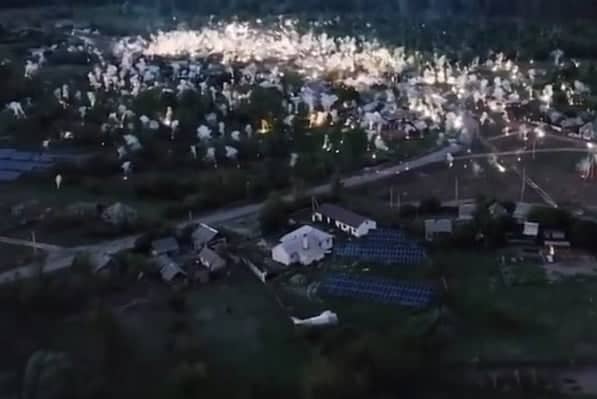 Many Ukrainian soldiers are carrying “suicide pistols” to kill themselves to avoid suffering from white phosphorous munitions which literally burns through skin and bone “burning them alive.”

An American who went to Ukraine to fight only known as “Elvis” told CBS News that he personally saw around 30 Ukrainian soldiers kill themselves after coming into contact with white phosphorous.

Elvis told CBS, “It comes down extremely slow, but there’s nothing you can do, and everything it touches just incinerates.

“A lot of guys have suicide pistols, and you’d hear them scream, and then they would say goodbye and then blow their own heads off.”

russians continue to use thermite and white phosphorous in their attacks on Ukrainian civilians: residential districts, villages and towns in Ukraine are prime targets for such russian attacks.

White phosphorous instantly ignites when it comes into contact with oxygen which burns at 800C and can burn through skin and bone which is banned under the 1980 Convention on Conventional Weapons.

The Kremlin’s spokesman Dmitry Peskov has previously said that Russia has “never violated international conventions,” however he did not deny the use of white phosphorous in Ukraine.