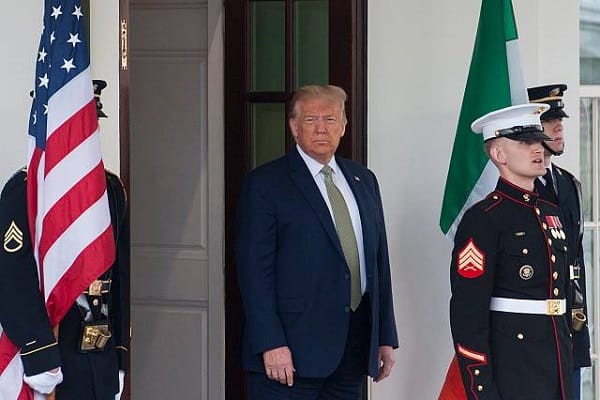 UK and Ireland added to US travel ban list

America has added the UK and Ireland to the Europe’s travel ban and the ban will come into affect from Monday.

The travel ban could start from Monday to try and prevent the spread of the coronavirus pandemic.

President Donald Trump announced from the White House there has been 50 deaths across the US, and New York has had their first fatality with almost 2,500 confirmed cases.

On Friday evening, President Donald Trump has declared a national emergency and he asked hospitals to activate their emergency preparedness plans.

President Trump said during a press briefing on Friday evening said, “I’d like to provide an update to the American people on several decisive new actions we’re taking that are very vigilant effort to combat and ultimately defeat the corona virus, we’ve been working very hard on this. We’ve made tremendous progress.

“Europe was just designated as the hotspot right now. We closed that border a while ago. That was lucky, through talent or luck, whatever you want. But through a very collective action and shared sacrifice, national determination, we will overcome the threat of the virus.

“Like our earlier, very aggressive actions with China this measure will save countless lives.

“To unleash the full power of the federal government did the separate today I am officially declaring a national emergency – two very big words.

“The action I am taking will open up access to up to $50bn of very important and a large amount money for states and territories and localities in our shared fight against this disease.”

It was further announced that all travel to and from Europe will stop, earlier today the World Health Organization (WHO) has said Europe is now the epicentre of the coronavirus outbreak.

The UK has now surpassed 1,100 confirmed cases of coronavirus as the pandemic spreads globally, bringing the total number of cases in the UK to 1,140 on Saturday afternoon, up from 820 this morning.

10 more people have died in the UK, bringing the total confirmed coronavirus deaths to 21 across the UK.

Professor Chris Whitty, Chief Medical Officer for England, said the ten who died “were in the at-risk groups.”

Professor Whitty said, “I understand this increase in the number of deaths linked to COVID-19 will be a cause for concern for many.

“The public should know every measure we are taking is seeking to save lives and protect the most vulnerable.”