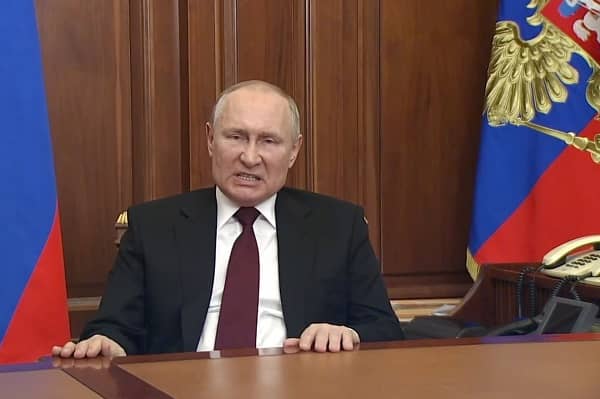 A top advisor to world leaders has warned that Vladimir Putin “could suffer the same fate” as the former dictator Colonel Gaddafi of Libya and Saddam Hussein who ruled Iraq for 40-years.

There has much speculation over Putin’s health, his mental state and whether or not someone will hopefully assassinate the Russian leader.

The Chief Directorate of Intelligence of the Ministry of Defence of Ukraine claimed that Putin will be “poisoned” by Kremlin chiefs and then the FSB will put in charge Russia’s Security Service director Oleksandr Bortnikov as his successor.

However one expert has claimed Putin could meet an even more gruesome end by “suffering the same fate” as his fellow dictators Gaddafi and Hussein, who were both brutally killed, with one being shot to death and the later being hung and taunted by his executioners.

Top neuroscientist Professor Ian Robertson, the founding director of Trinity College Institute of Neuroscience said that Putin’s assassination or death is very “unlikely to be painless.”

He told a BBC documentary, “Even if he could arrange a handover that guaranteed he would not suffer the fate of Gaddafi or Saddam Hussein, how do you replace the incredible mainlining into your reward network of exceptional power?

“There is an awful bleakness and blackness out there awaiting him.”

A former CIA Moscow chief has claimed that Russia Defence Minister Sergei Shoigu could be central to overthrow Vladimir Putin along with other “rivals.”

The CIA insider believes that a secret mutinous plot to oust Putin is well underway and his cronies are already lurking waiting for the war in Ukraine to fail.

The former CIA Moscow station chief told The Daily Beast, “Nobody’s gonna ask, ‘Hey Vladimir, would you like to leave?’

“They schwack him for it. That’s what they’ll do.”

There are three main Kremlin heads who could take Vlads place, Nikolai Patrushev, the chief of Putin’s Security Council, is top of the list, the Defence Minister is likely the most probable.

Then there is Alexander Bortnikov, the director of Russia’s secretive intelligence agency FSB.

Ronald Marks, another ex-CIA spy, warned there could be a huge power struggle in Russia which would cause chaos in Moscow.

“It wouldn’t go to hell right away.

“We’re not talking about tanks in the street right away.

“What you’re probably going to see though is among the guys around him, there will be a struggle to take that job,” he told the Daily Beast.