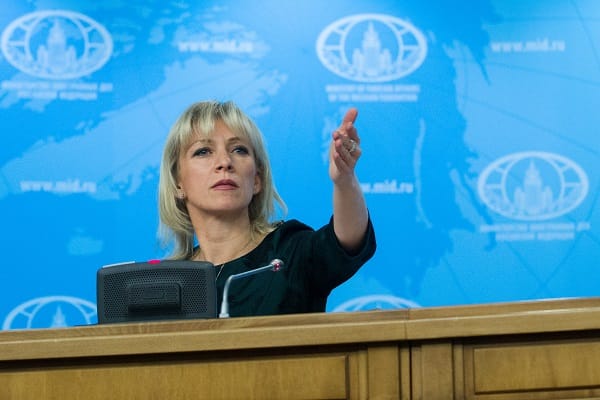 The British Defence Secretary ripped into Vladimir Putin calling him a “lunatic” who has “small man syndrome” and believes he is “macho” and has made a laughing stock of the so called Russian leader’s spokeswoman.

Ben Wallace also tore into Russian Foreign Ministry spokeswoman Maria Zakharova and said she is nothing but a “comedy turn” who is also a “lunatic like” Putin is.

This comes after the British Prime Minister mocked Putin and said his war in Ukraine is a clear example of “toxic masculinity” then added that a female President would not have made the mistakes the Russian leader has.

Johnson told German TV that Putin would not have started his “crazy, macho” war in Ukraine if he were a woman.

The British Prime Minister told ZDF, “If Putin was a woman, which he obviously isn’t, but if he were, I really don’t think he would’ve embarked on a crazy, macho war of invasion and violence in the way that he has.

“If you want a perfect example of toxic masculinity, it’s what he’s doing in Ukraine.”

On Sunday G7 leaders met in Bavaria and savaged Putin laughing and joking about the Russia leader saying, shall we go “bare chested” riding, ridiculing Vlad the Invader over his infamous horse riding photo.

The Defence Secretary told LBC Radio, “Well I certainly think President Putin’s view of himself and the world is a small man syndrome, macho view.”

“I think he’s certainly got it in spades.

“But I think the real challenge here is the Russian system’s view that somehow some states are lesser than others, their rights don’t count.

“If they want to paint themselves into a new history, they seem to think the way to do that is through violence and invasion.

“And I think that’s something to worry about.

Wallace hysterically then mocked Zakharova, who is Putin’s spokeswoman and said, “To be fair there is that lady, the spokeswoman in the Ministry of Foreign Affairs, she’s like a comedy turn, she does her statement every week, threatening to nuke everyone or doing something or another.

“She’s definitely a woman… She’s a lunatic like he is, so I’ll leave it to that.”

Another on of Putin’s mouthpiece’s is the “Iron Doll” Olga Skabeyeva who has once again blurted out the same old rhetoric and threatened to nuke London, Paris, Berlin and Washington blaming “NATO of openly being hostile to Russia.”

The head of Russia’s Space Agency, Roscosmos, Dmitry Rogozin published satellite pictures and coordinates of Downing Street in London, the White House in Washington DC and NATO’s headquarters whereby Skabeyeva then openly said on Kremlin’s state TV these sites will be hit with a nuclear weapon.