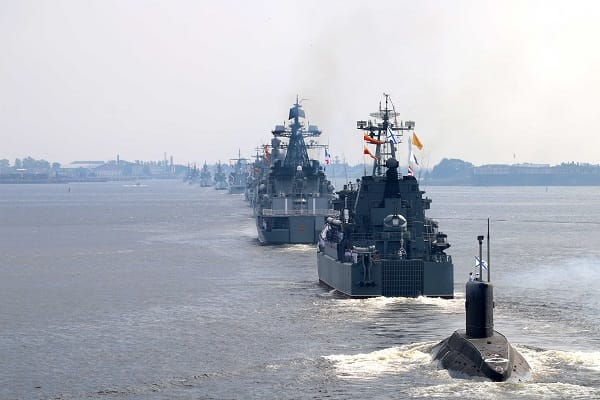 Russian sailors are refusing to carry out their combat orders as they are fearing for their lives as international sanctions are preventing urgent repairs needed on the warships which must be yet another embarrassing blow to Vladimir Putin.

The “emergency state” of the Russian warships means that sailors of the 106th brigade of surface ships of the Caspian Flotilla of the Southern Military District of Russia are afraid “each trip” they take out to sea could be a “one-way ticket” to their deaths.

The Main Defense Intelligence of the Ministry of Defense of Ukraine has reported, “International sanctions imposed against the occupying country do not allow full maintenance and repair of navigation equipment and diesel equipment of the warships of the flotilla.

“To ensure buoyancy of some ships, including cruise missile carriers, details from Chinese-made household appliances, purchased at much higher price, were installed instead of the original units.

“Now, the occupiers, who are familiar with ‘import substitution,’ perceive each trip to the sea as a one-way ticket.”

“After all, it can be their last one and lead to an environmental disaster in the region,” the Main Defense Intelligence added.

The Main Defense Intelligence continued that the command of the Caspian flotilla are fearful of inspections and accusations of embezzlement of funds allocated for the purchase of spare parts.

The sailors are trying to hide in every possible way the facts of the incapacity of the ship’s composition and if any of the crew were found to leak such information they have been threatened with charges of high treason and will be sentenced to 15-years in prison.

The intelligence report added, “The invaders decided to secretly write collective letters to Putin and Shoigu, in which they reveal all the financial schemes of the command.”

The Military Intelligence of Ukraine have also published a list of war criminals of the servicemen of the 106th brigade of surface ships.

Footage shows a chemical plant blown up by Russian forces...

Boris admits he ‘thought about’ quitting over partygate then says...

Betfair Exchange: Boris Johnson odds are now at 1/2 to...

Aviation chiefs warned they ‘risk harming their industry’s reputation for...

Union calls for more bank holidays to provide workers with...

TfL seeks views on reshaping the central and...

Boris admits he ‘thought about’ quitting over partygate...

The TUC union are calling for an increase in the number of bank holidays in the UK as workers typical get eight a year, whilst Scotland and Northern …

The rise in the cost of living...

BBC Four and CBBC are to axed...

Head teachers are being forced to swap hot meals for sandwiches even for the most vulnerable due to increased food prices, cuts in funding and increasing inflation. The …