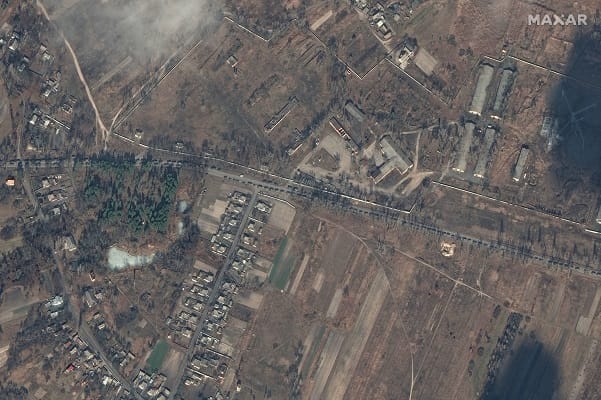 Russian convoy 40 miles long with thousands of troops is closing in on Kyiv, satellite images show

Satellite images provided by US firm Maxar technologies shows a Russian military convoy which is 40 miles with thousands more troops are thought to be around 15 miles from the Ukrainian capital.

Despite the fast approaching threat containing thousands of Russian troops, Ukraine’s President Zelensky appeared unfazed, he said in a video message late on Monday that they remained determined to hold the capital.

“For the enemy, Kyiv is the key target,” he said.

“We did not let them break the defence of the capital, and they send saboteurs to us… We will neutralise them all.”

The Russian invasion has now entered its sixth day and many more soldiers on both sides have been killed.

Ukraine authorities said that at least 70 soldiers were killed on Sunday following the carpet bombardment on the military base in Okhtyrka.

No historical site is safe from the Russian invasion force pic.twitter.com/4hkGZyn9Cr