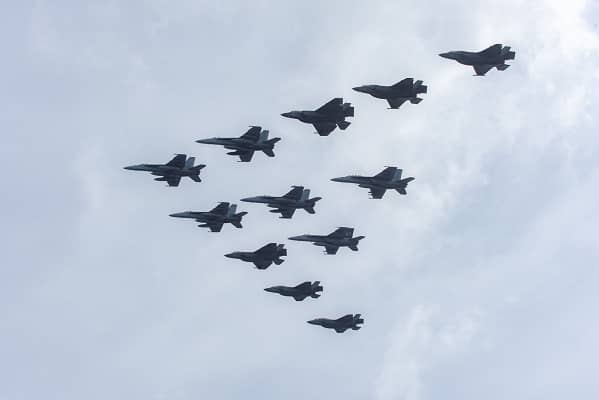 NATO has sent additional war ships and fighter jets to Eastern Europe as tensions grow in Europe for all out war in the Ukraine.

NATO has also placed all forces on standby and said, they are “reinforcing the Allied deterrence and defence as Russia continues its military build-up in and around Ukraine.”

“NATO will continue to take all necessary measures to protect and defend all Allies, including by reinforcing the eastern part of the Alliance.

“We will always respond to any deterioration of our security environment, including through strengthening our collective defence.”

This comes as Spain has sent war ships to join NATO naval forces and are preparing to sent their troops Romania under NATO command.

Denmark has sent a ship to the Baltic Sea and are to deploy four F-16 fighter jets to Lithuania to support NATO’s air defences in the region.

The British government has sent thousands of tank and anti-missile rounds to the Ukraine with soldiers in a training capacity, although it is thought the UK will not send in troops.

Moscow has planned military exercises involving all their fleets in the Irish Sea which is “no welcome” by the Ireland’s Foreign Minister Simon Coveney.

Coveney said on Monday, “We don’t have a power to prevent this happening but certainly I have made it clear to the Russian ambassador in Ireland that this is not welcome.

“This isn’t a time to increase military activity and tension.”

Moscow’s planned military exercises from the Pacific to the Atlantic is a show of strength in a standoff to the West.

The US have said that they will consider to increase their presence in Eastern Europe which would most likely see an aircraft carrier and a number of warships with troops on standby.

The US government have told their citizens not to travel to the Ukraine due to the “increased threats of Russian military action and Covid-19,”the US State Department said.

The added, “The security conditions, particularly along Ukraine’s borders, in Russia-occupied Crimea, and in Russia-controlled eastern Ukraine, are unpredictable and can deteriorate with little notice.

“Demonstrations, which have turned violent at times, regularly occur throughout Ukraine, including in Kyiv.”