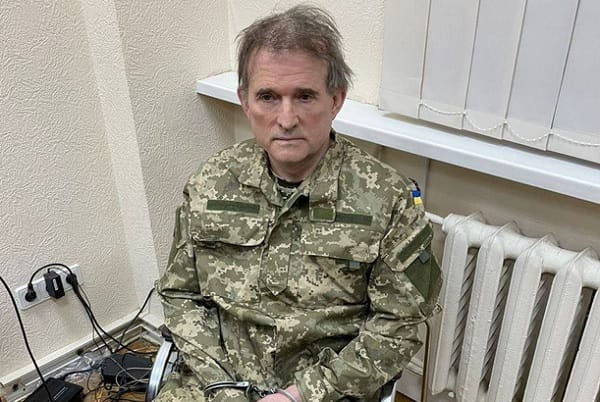 Viktor Medvedchuk who was detained by the State Security Service of Ukraine (SBU) has appealed to his friend Vladimir Putin to do a prison exchange for Ukrainian troops and residents of Mariupol.

Medvedchuk is also known as Ukraine’s “grey cardinal” and “the prince of darkness” and has been a key back door politician in the Ukraine.

Last week President Volodymyr Zelensky offered Russia to exchange former MP of the Opposition Platform – For Life party Medvedchuk for Ukrainian citizens who are held captive by the Russian military.

Medvedchuk said in a video statement released by the SBU on Monday, “I, Viktor Volodymyrovych Medvedchuk, want to appeal to Russian President Vladimir Putin and Ukrainian President Volodymyr Zelensky with a request that the Ukrainian side exchange me for the defenders of Mariupol and [its] residents who are there and do not have the possibility of a safe exit through humanitarian corridors,”

The SBU also said the Russian forces have provoked “one of the largest humanitarian disasters” in the besieged city of Mariupol, eastern Ukraine.

The Ukrainian Security Service said that Russian troops are “forcibly taking Ukrainians” to Russia and they estimate there is still around 120,000 civilians trapped inside the besieged city of Mariupol.

The SBU said, “The invaders are bombing the civilian population, blocking the delivery of humanitarian aid to the city, forcibly taking Ukrainians to the territory of Russia and deliberately destroying the city.

At the same time, according to various estimates, about 120,000 civilians remain in the blocked Mariupol, and the fighters of the Azov regiment continue to defend the city and the 36th Marine Brigade.”