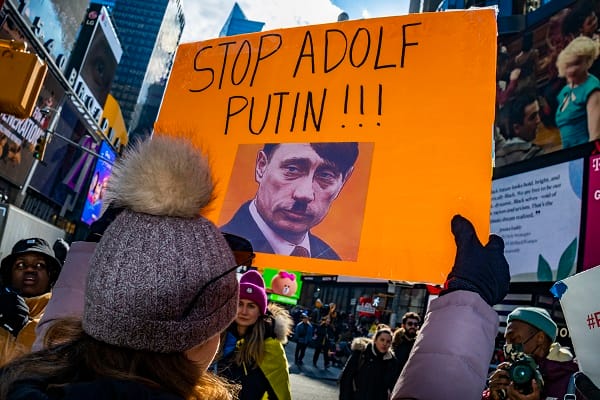 President of Ukraine Volodymyr Zelensky has slammed Vladimir Putin’s army and has accused them of all wanting “to be better Nazis than Hitler.”

Speaking at the opening ceremony of the 75th Cannes Film Festival Zelensky described the unfolding events of when the war in Ukraine started.

He told the opening ceremony, “It started in Ukraine on February 24. At four o’clock, when we heard the first missile explosions.

“When the air strikes began. And when death, going to Ukraine across the border, marked its equipment with the swastika analogue – the ‘Z’ symbol.

“They all want to be better Nazis than Hitler … Now, there is not a single week passing without mass graves of killed and tortured people found in the territory where Russian troops were or still are.

“Some 229 children were killed as a result of the Russian invasion. They [Russian military] can’t get anywhere but kill, kill, kill! They have sown Europe with corpses …,” Zelensky said in a video address on Tuesday evening.

“You saw what the Russian military did in the small town of Bucha. You saw Mariupol. Saw Azovstal.

“Saw the theater blown up by a Russian bomb. By the way, it was similar to where you are now. Ordinary civilians were hiding there from the shelling. Two large and noticeable inscriptions ‘Children’. They were on the asphalt near the theater.

“And we will never forget it, because it is not even Hell. War isn’t Hell. War is war, and Hell is Hell. And of the two, war is a lot worse,” he added.

According to him, Ukraine has already been hit by more than 2,000 Russian missiles, dozens of cities have been destroyed, more than 500,000 Ukrainians have been deported to Russia by force.

“Tens of thousands are in Russian camps created on the model of Nazi camps. No one knows how many prisoners will survive there. But everyone knows who is to blame, ” the president said.

“You think soap can wash you? Unlikely. The worst war since World War II is already in Europe.

“First of all, because of one person who is in Moscow. Other people die every day. And they will not come to life after the phrase ‘Stop, cut!’” he noted.

He then addressed the representatives of cinematography, Zelensky said, “Will the movie be silent or will it speak? If there is a dictator, if there is a war for freedom and if again, as then, everything depends on our unity, will cinematography remain outside this unity?

“The land of our country is already streaked with thousands of trenches. Of course, we will continue to fight. And we have no alternative but to fight for freedom. And I am sure that the dictator will lose.

“ But words should sound like in 1940. Sound from all screens of the free world.

“We need a new Chaplin, who will prove again that cinematography is no longer dumb.”