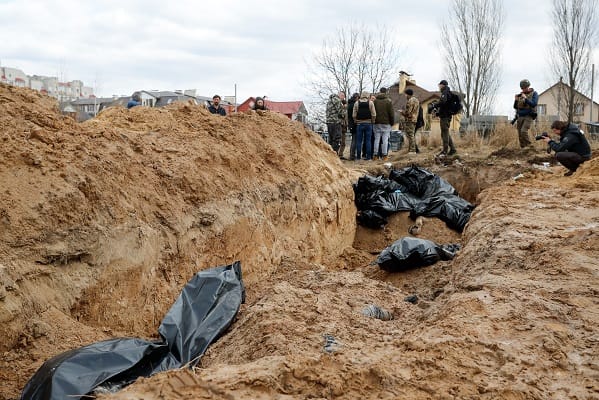 General Lord Dannatt, former Chief of the General Staff has warned on Wednesday that “war crimes are stacking up” in Ukraine by Russian forces.

He said evidence emerging from Ukraine increasingly points to “genocide that is plotted from the top.”

General Lord Dannatt, told Sky News, “The war crimes are stacking up to the point that it looks like a concerted effort to reduce the Ukrainian population.

“That is getting very close to the definition of genocide.

“It is absolutely right and proper that all these war crimes are being chronicled, evidence is been gathered.”

He added, “This is looking to me increasingly like genocide that is plotted from the top and the top therefore must bear responsibility, and maybe one day, even if not in a physical court, in the court of history, be condemned.”

The Ukrainian President Volodymyr Zelensky has told the United Nations Security Council on Tuesday the extent of what Russian forces have done to innocent Ukrainian civilians, he said that they “cut of limbs, slashed their throats.”

He said, “Everything in the memory of the civilians who died, who were shot and killed in the back of their head after being tortured,” he said.

“Some of them were shot on the streets. Others were thrown into the wells. So they die. They are in suffering. They were killed in their apartments, houses blown up by grenades.

“Civilians were crushed by tanks while sitting in their cars in the middle of the road just for their pleasure.

“They cut off limbs, slashed their throats. Women were raped and killed in front of their children.”