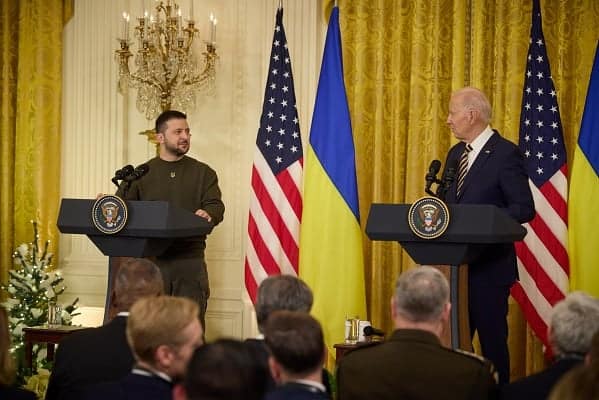 President Biden has said that he believes Ukraine’s success after the battle will help to avoid a third World War in the West and in Europe.https://londonlovesbusiness.com/indicators-suggest-that-putin-may-have-already-decided-to-reconstitute-a-significant-conventional-russian-military-threat-to-europe/

Following talks between Biden and Zelensky, there were asked about possible deliveries of long-range weapons, including ATACMS missiles, to Ukraine.

During the press conference, Biden said, that “before Russia invaded, we had provided an enormous amount of security assistance.”

President Biden said, “We’ve given Ukraine what they needed when they needed to defend themselves.

“And since the invasion, that has resulted in more than $20 billion, in terms of security assistance.

“Just today, I approved another $1.8 billion in additional assistance to Ukraine for it to succeed on the battlefield.

“And we’re focused on working with allies and partners to generate capability in four key areas: air defense, we’ve worked with partners to get Ukraine tanks and other armored vehicles and 200,000 rounds of additional ammunition.”

Biden said, it is very crucial for the US “to stay with Ukraine. And the idea that we would give Ukraine material that is fundamentally different than is already going there would have a prospect of breaking up NATO and breaking up the European Union and the rest of the world.

“I have spent several hundred hours face-to-face with our European allies and making the case as to why it was overwhelmingly in their interest that they continue to support Ukraine.

“And I think it can all be avoided by making sure that Ukraine is able to succeed in the battlefield.”