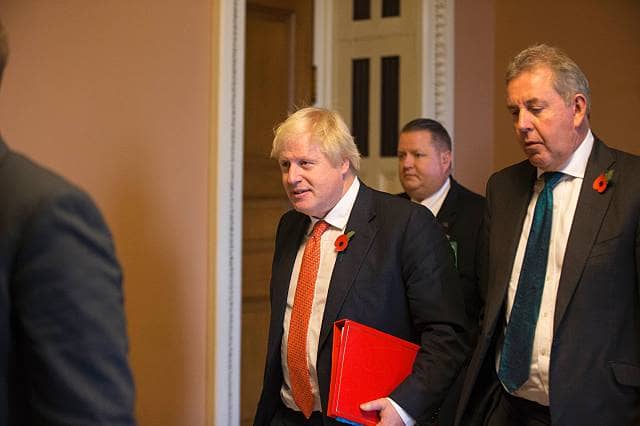 Foreign Office minister Sir Alan Duncan MP has hit out at Boris Johnson saying that he has “thrown” Sir Kim “under the Bus” as he has not supported the former US ambassador.

Sir Alan told Sky News that Johnson has “basically thrown him [Darroch] under the bus.”

“I think that the conduct of Boris Johnson has discredited him enormously in the eyes of many people in this country.”

According to Sam Coates, Sky News deputy political editor, because Johnson refused to guarantee Sir Kim would stay in his position as the UK ambassador to the US should he become prime minister, Sir Kim “decided the game was up.”

Hunt said in a tweet, “Deeply saddened to hear of the resignation of Sir Kim Darroch. Standing up for Britain means standing up for the finest diplomats on the world. It should never have come to this.

He added, Sir Kim served Britain with distinction for 42 yrs and whenever I visited Washington as Foreign Secretary, I was struck by his professionalism and intellect.

“Profoundly regret how this outrageous leak caused this. Sir Kim deserves to look on his career with satisfaction & pride.

Johnson has called for whoever leaked the diptels (diplomatic telegrams) to be “eviscerated” and said that Sir Kim is a “superb diplomat.”

“I think whoever leaked his diptels really has done a grave disservice to our civil servants, to people who give impartial advice to ministers…

“I hope that whoever it is, is run down, caught and eviscerated, quite frankly, because it is not right that advice to ministers that civil servants must be able to make in a spirit of freedom should be leaked.”

Theresa May said this resignation is a “matter if deep regret.”

The prime minister told the House of Commons during PMQs, “The whole Cabinet rightly gave its full support to Sir Kim on Tuesday.

“Sir Kim has given a lifetime of service to the United Kingdom and we owe him an enormous debt of gratitude.

“Good government depends on public servants being able to give full and frank advice.

“I want all our public servants to have the confidence to be able to do that and I hope the House will reflect on the importance of defending our values and principles, particularly when they are under pressure.”

Labour leader Jeremy Corbyn also defended Darroch and said he regrets his resignation and hit out at President Trump saying his comments were “beyond unfair and wrong” during PMQs.

He said, “I think the comments made about him are beyond unfair and wrong.

“I think he has given honourable and good service and he should be thanked for it.

“And I think the whole House should join together in deeply regretting the feeling that he has obviously got that he must resign at this moment.”

However, Tom Tugendhat Chair of Foriegn Affairs Select Commmittee made a veiled attack on Johnson and said he is “disappointed by those who chose not to support Her Majesty’s envoy Kim Darroch”

Scotland’s first minister Nicola Sturgeon also hit out at Johnson. She said in a tweet, “It is shameful that Kim Darroch has effectively been forced out for doing the job that diplomats are appointed to do.

“Boris Johnson’s failure last night to stand up for him – and stand up to the behaviour of Donald Trump – spoke volumes.

Sir John Major who is backing Hunt to become the next Tory leader and prime minister said prior to Sir Kim’s resignation that he has been “thrown to the wolves.”

During last night televised debate Hunt did offer his support to Darroch in wanting to keep him on as the UK ambassador to the US, whilst Johnson failed to back him.

Sir John said, “There is a secondary point that Mr Johnson and everybody else should ponder.

“The whole of the diplomatic service, which is vital to the interests of this country, will have seen that one of their most senior diplomats was prepared to be thrown to the wolves because of the criticism of a non-British government.

He added, “He has behaved exactly as he was expected to behave, indeed, probably instructed to behave. And he deserves the support of the British government.”