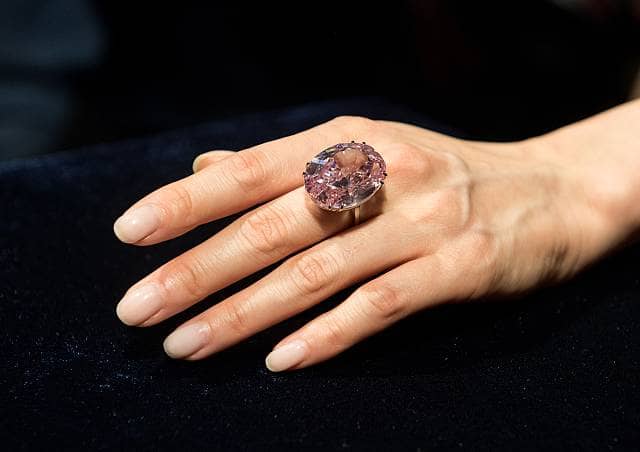 Christie’s is set to auction a nearly 19-carat, rectangular-cut Pink diamond for a jaw-dropping price tag of $50m. The rare ‘Pink Legacy’ is set to go under the hammer at Christie’s annual Magnificent Jewels auction at Geneva’s Four Seasons Hotel des Bergues today.

This 19-carat pink diamond is expected to fetch up to $50 million at Christie's Geneva auction https://t.co/1xq6cBobGQ via @TicToc pic.twitter.com/LfaeFl9813

The stone once belonged to the Oppenheimer family, and Christie’s says it qualifies as a Type IIa diamond — the most chemically pure stones with little if any nitrogen. Such vivid pink diamonds over 10 carats are “virtually unheard of” in salesrooms, it added.

International jewellery specialist at Christie’s, Jean-Marc Lunel, told media: ‘If you consider that most pink diamonds weigh less than a carat, it is really something. It is probably the most beautiful (specimen) ever presented at public auction.’

Tom Moses, Executive Vice President of the Gemological Institute of America, added: ‘Pink diamonds of any size and depth of colour have always had a special allure. This 18.96 carat emerald cut pink diamond is amongst the rarest of all gemstones’. Given that Christie’s previous sale of a Fancy Vivid Pink diamond (named The Pink Promise) sold for over £30 million and was a mere 14.93 carats, we can pretty much guarantee that this one will go for at least that.

The Pink Legacy diamond is expected to fetch $50 million when it goes under the hammer in Genevahttps://t.co/n4qsBMumgh pic.twitter.com/J9DdmloXp9