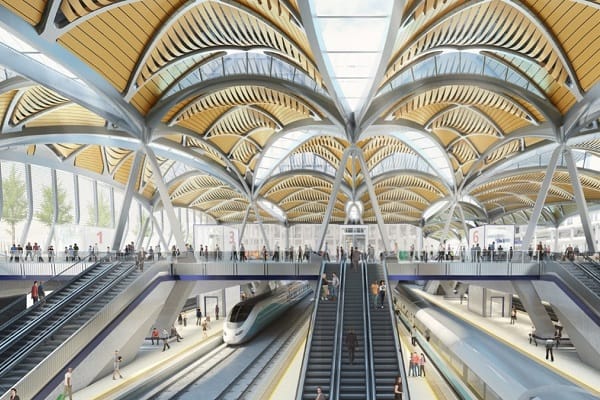 HS2 could launch the renaissance of mail by rail

The government’s announcement that it has given a green light for HS2 construction is great news for all UK freight and parcels operators, says the UK courier services expert ParcelHero. It believes the high-speed rail line between London and Birmingham, and then in stage 2 onwards to Manchester and Leeds, will free-up existing main lines for many more freight trains.

Though the project has been criticised on cost and environmental grounds, it will mean the bulk of express passenger services on the West Coast Main Line (WCML) can be transferred to the new railway, argues ParcelHero’s Head of Consumer Services, David Jinks MILT. He said HS2 will clear pathways for increased freight services on the West Coast route, potentially including considerably more mail trains. Currently freight plays second fiddle to passenger services on the existing network, with many cargo services having to run at night when there are fewer passenger trains.

Jinks said, “Not long ago much of our mail was transported by rail services such as the legendary Night Mail. Our post and parcels were sorted on the move on these Travelling Post Office (TPO) trains. As recently as 2003 there were 49 mail trains a day still running, carrying 20m packages and letters a day. But the last TPO train steamed into the sunset back in 2004, ending a 166-year history. Today only 15 small mail trains (Class 325 multiple units) still run, operated by the German-owned DB Cargo for Royal Mail.”

But, Jinks said the news that HS2 is now fully back on track means many of the intensive passenger services on the WCML to Birmingham and Manchester, and some East Coast Main Line services to Leeds, could be switched to the new railway.

“That means considerably more spare capacity, certainly on the West Coast route, to get freight off the road and back onto the railway. That has to be good news for the environment. And the opportunity to run faster, more regular freight service on the existing main lines will improve reliability and could encourage not only  the introduction of more post office trains, but also tempt UK couriers to use greener, faster freight services as part of their logistics options.”

Jinks added, “Consumers are pressing for more sustainable delivery choices, and getting packages and parcels off the road and onto the rail is a very environmentally friendly option. HS2 undoubtedly clears the way for more post office mailings to be switched from road and back on track.

“It’s also possible that if access to rail freight services is made easier, cheaper and more reliable as a result of all the new capacity made available by HS2, Britain’s parcel couriers could incorporate rail services, particularly for longer distance trunking services to Scotland, for example.’

“Our UK courier services guide details literally thousands of different courier services options using a mix of aircraft for long distance shipments, lorries for trunking packages between main distribution centres and local courier depots, and vans for the final mile.  Couriers are used to switching between different modes of transport. Including rail in this mix could become a viable option in the future thanks to the go-ahead for HS2.”