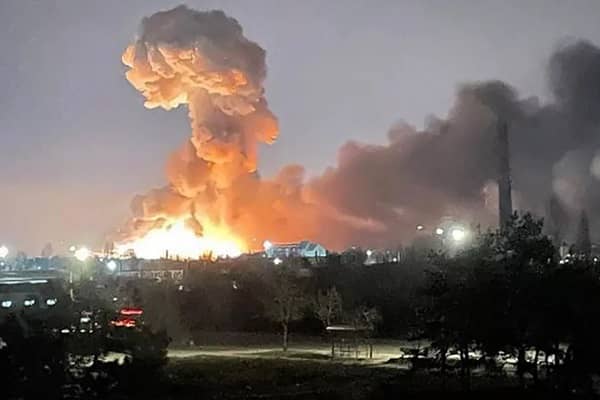 A flurry of explosions rocked Kyiv on Sunday morning as Russia fired cruise missiles at a “residential district” in what the Mayor called “intimidation.”

Journalists in the city saw rescue services rescuing civilians and fighting a blaze in the early hours, which is the first attack since 5 June.

Kyiv’s Mayor Vitali Klitschko said four people were taken to hospital and a seven-year-old girl was pulled alive from the rubble in the capital.

He added that the latest missile strike on the capital “may be symbolic attack” ahead of NATO’s summit in Madrid where the Alliance will also discuss Finland and Sweden becoming members.

Andriy Yermak, head of the president’s administration, said a kindergarten was also bombed, whilst Ukrainian MP Oleksiy Goncharenko wrote on the Telegram that “according to prelim data, 14 missiles were launched against Kyiv region and Kyiv.”

Ukrainian MP Oleksiy Goncharenko wrote on the Telegram that “according to preliminary data, 14 missiles were launched against Kyiv region and Kyiv.”

On Sunday morning the UK’s ambassador to Ukraine, Melinda Simmons, wrote on Twitter: “Kyiv was shelled overnight by Russia.

“A residential district was targeted. Nothing military there. What murderous cowardice.”

The missile attack on Ukraine from Belarus on Saturday morning was a large-scale provocation by Russia aimed with further involvement of Belarus in the Ukraine war.

The Main Intelligence Agency of the Defense Ministry of Ukraine said this was the first time airstrikes were launched against Ukraine directly from Belarus.

The intelligence agency said, “On the night of June 25, a mass missile attack was mounted on the territory of Ukraine. In particular, the Russian aircraft operated directly from the territory of Belarus.

“Six Tu-22M3 aircraft were used to launch twelve X-22 cruise missiles. The attacks were mounted from the district near the town of Petrikov, not far from Mozyr, approximately 50-60 kilometers from the state border of Ukraine.

“The aircraft took off from the Shaykovka Airport in Kaluga region, Russia. They crossed the territories of Kaluga and Smolensk regions and entered the air space of Belarus.”

Russia also launched around 30 missiles at Zhytomyr region leaving one serviceman dead and another one injured.