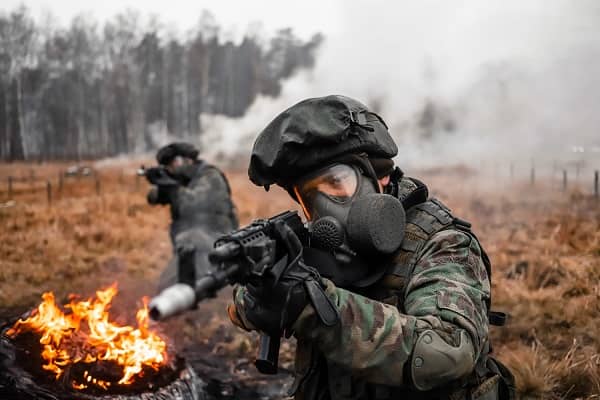 A Belarusian Lieutenant Colonel has told his troop not to fight in Ukraine because this is “not our war” declaring mutiny on Vladimir Putin and Alexander Lukashenko.

Putin is facing his own mutiny as thousands are saying up yours and are fleeing to avoid mandatory military conscription with many Russian troops downing weapons.

Sakhashchyk Valery Stepanovych, a retired Belarus lieutenant colonel said “lads in blue vests” that are “sitting in forests” on the Belarus Ukraine border who are ready to invade Ukraine, warned that “many would not return home.”

On Sunday it was reported that Belarusian “Special Forces” were loading aircraft and equipment into aircraft.

Lukashenko delivered a harsh rant against Ukraine on Sunday saying the “worst would happen” if it continues.

The Belarusian dictator warned, “The conflict in Ukraine is the thin edge of the wedge. Believe me, I know what I’m talking about.

“If it continues like this, the worst will happen.

“[President Volodymyr Zelenskyy] will not be hidden in any American or some other bunker. That’s why the war should be ended today.

“I wouldn’t even call it the war. This is a conflict.

“The war will last for one-two days, but there will be a meat grinder in three days.”

The retired Lieutenant Colonel said, “Lads in blue vests, just like what I’ve worn all my life, are sitting in the forest on the border with Ukraine.

“Likely, many will not return home alive, the Russian army with massive military experience has been in the waters for three days now – casualties number in the thousands.”

Lt. Col Stepanovych called upon his “brothers” to “not participate in this dirty deed” and told them that this is “not our war.”

The role of wealth managers in decision making:...

Russian General warns ‘the first to be hit...