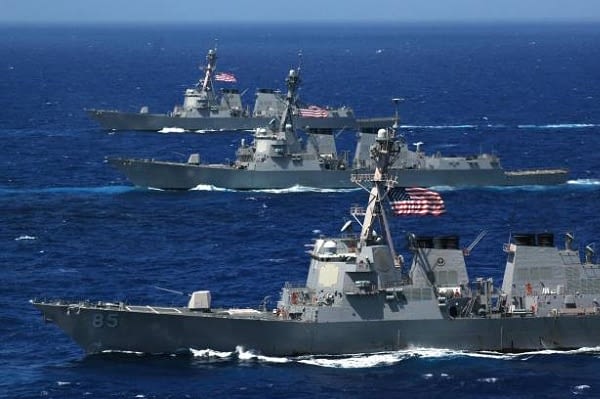 US military activity in the heavily contested South China Sea (SCS) has dramatically increased and the risk of a confrontation is increasing.

The report says the US conducted eight freedom of navigation operations, whereby the US Navy sail within 12 nautical miles of China’s land.

It also said that the US Navy have engaged in 50 or more joint and multiple military exercises with Southeast Asia in the region.

The report said, “As the strategic competition between China and the US has continued to intensify in recent years, the comparison of the navies have become evident, particularly in the South China Sea.

“By carrying out freedom of navigation patrols in the South China Sea and sailing through the Taiwan Strait, the US is making a retaliatory response to China, which is becoming a new trend.

“As China continues to modernise and strengthen its navy and air force, the US will become more concerned and increase its surveillance…against the Chinese military.”

It concluded, “The risk of confrontation in the sea and in the air will increase.”

Beijing are plotting to militarise the SCS which will bring the entire region closer to war.

In response to the US Navy’s guided missile destroyer, the USS McCampbell sailing through the region, the Chinese military have stepped up their anti-submarine drills in the SCS.

China have stepped their fishermen militia which outnumber fishing boats in the region and Chinese coastguard ships are closely following as an act force.

Earlier this month the US Navy sent the USS Theodore Roosevelt and a warship to Danang, Vietnam to mark 25-years of diplomatic relations.

China saw this move as growing diplomatic relations between the US and Vietnam.

The US Navy are aggravating Beijing as they are doing live firing exercises and in response China are firing laser beams on American surveillance planes, and are conducting air blasts in the seas.

Meanwhile, the UK has seen a spike in “unusually high levels” of activity in the English Channel by Russian warships, and three weeks ago Russian bombers flew along UK airspace in Scotland.

Beijing issues Taiwan ‘battlefield’ warning which could drag the US...

China threatens World War Three which could be triggered ‘at...

President Biden to lift travel ban to the US for...