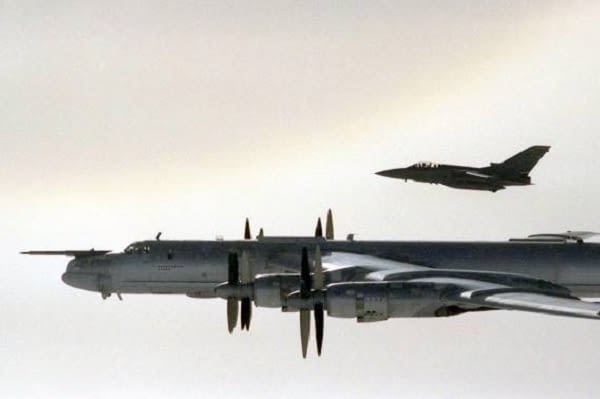 The UK has seen a spike in “unusually high levels” of activity in the English Channel by Russian warships, and three weeks ago Russian bombers flew along UK airspace in Scotland.

NATO Secretary General Jens Stoltenberg said, “It is very likely that Russia will try to take action while the US and Nato is distracted with Covid-19, arguably the first time we have a serious home threat that is impacting our readiness.

“In terms of overall readiness, the question is: how many soldiers can you cut from a brigade before it is inoperational?

“The other challenge is the logistics and supply of strategic medical reserves. The US’s number poised: Putin one priority is saving American lives. This means fewer personnel abroad and less resources.

“All this is ringing alarm bells in foreign capitals.”

The former US diplomat Brett Bruen, the head of the Global Situation Room think tank, said the decision made by the US to send just 6,000 US troops to Europe’s exercise, Defender Europe 20, and move troops back to the US to help with coronavirus was “carefully watched by Putin.”

As the Royal Navy prepares to help the NHS and other government departments deal with the response to the coronavirus outbreak, nine British ships have been shadowing seven Russian vessels in waters around the UK.

Three weeks ago six RAF fighter jets were scrambled as a Russian bomber tried to enter UK airspace over Scotland.