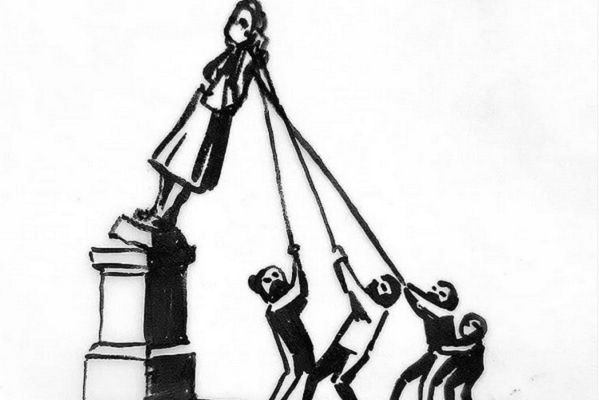 The secretive graffiti artist Banksy has offered his own suggestion as to what could replace Bristol’s toppled Edward Colston statue.

In a new black and white sketch Banksy drew four protestors pulling down the bronze statue of the former slave trader, Colston.

Under the drawing Banksy captioned on his Instagram post, “What should we do with the empty plinth in the middle of Bristol?

“Here’s an idea that caters for both those who miss the Colston statue and those who don’t.

“We drag him out the water, put him back on the plinth, tie cable round his neck and commission some life size bronze statues of protesters in the act of pulling him down.

“Everyone happy. A famous day commemorated.”

The world-famous street artist Banksy has unveiled fresh artwork inspired by the tragic death of George Floyd in the US.

Banksy posted the new artwork on Instagram on Saturday and wrote, “At first I thought I should just shut up and listen to black people about this issue.

“But why would I do that?

British taxpayers to pay an ‘appalling’ £4.3m bill for policing...

Police are urging people to come forward who were ‘significantly’...

Nine Insulate Britain activists will be eating Christmas turkey in...

Insulate Britain protesters block Parliament Square and glue themselves to...

‘Irresponsible’ Insulate Britain ‘crusties’ have been summoned to appear before...

Boris must ensure ‘all the dirty linen’ is...

Salaries for white collar professionals will increase by as much as 25% in the first quarter of 2022, as companies bouncing back after the Omicron-slowdown fight to hold …

‘Another nail in the high street’s coffin’...

Almost a third of Brits will quit...

Companies need to step up to the...