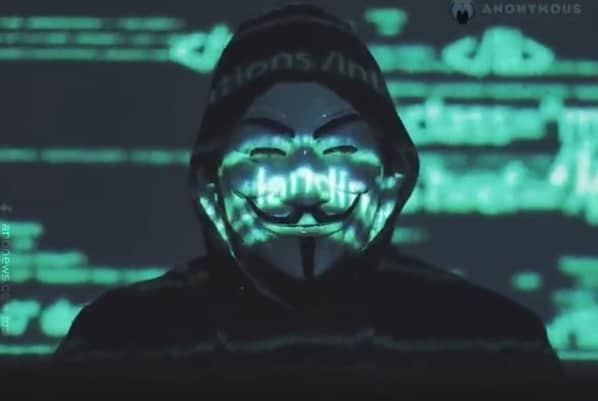 Anonymous has released a video on Sunday morning warning the Russian President Vladimir Putin that if he continues he will “face unprecedented cyberattacks from all corners of the world.”

In the video the hacking group warned, “Members of Anonymous have declared cyber war against your aggressive regime.

“With numerous government websites being taken offline in the past several days. A few downed websites is only the beginning though.

“Soon you will feel the full wrath of the world’s hackers, many of whom will likely reside from your home country.

Your secrets may no longer be safe, and there is a chance that key components of your government’s infrastructure could be hijacked.

Anonymous then turns the focus on to the “invasion of Ukraine” and the group said, “the previous invasions of Georgia and Crimea are starting to come into focus and show a clear strategy.”

Rubbing salt into old wounds for Putin Anonymous added, “The Soviet Union failed many years ago and the world has not forgotten the brutality of that regime.

“The people of the world will resist you every step of the way.

“This is not a war that you can win regardless of how powerful you think you are.

“We are Anonymous. We are Legion. Expect us.”

On Saturday Anonymous had spectacularly hacked the Russian Ministry of Defence database and leaked thousands of emails, passwords and telephone numbers.

This comes after the group declared war on Russia on Friday and brought down “websites of the Kremlin” which includes “Kremlin.ru” the “government.ru” and “the Russian defense ministry mil.ru.”

On Saturday morning the hacking group announced that they had uncovered 200 gigabytes of emails from Belarusian weapons manufacturer Tetraedr, who they say are the company which has provided Vladimir Putin with logistical support for the invasion into Ukraine.

The Ukrainian government asked last week for hackers to strike and Anonymous collective have answered their call for help.