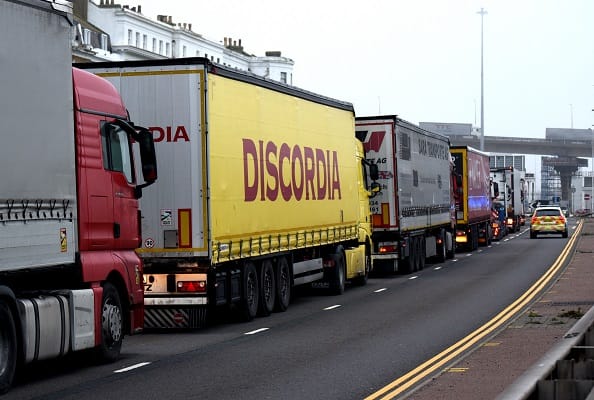 Holidaymakers are stuck in queues at UK Port yet again as a direct result of “French immigration controls” amid “woefully inadequate” staffing.

The Port of Dover has declared a “critical incident” on Friday after they had “worked so hard in good faith” to prepare for a busy summer, but have been let down by the French.

P&O ferries are strongly advising anyone who is travelling on Friday to “allow at least six hours to clear all security checks,” but sadly for many holidaymakers this may be a little too late who have already started their journeys to the Port of Dover.

Doug Bannister, the port’s chief executive, told Sky News that “woefully inadequate” staffing was to blame for the “major disruption” at Dover.

Bannister said, “The cause of it is French immigration controls.

“We’ve been let down this morning despite the planning of the last several months to get ready for this day.

“This is causing major disruption. French border controls are not properly staffed.

Traffic control is a shambles in the port. Took me 3.5 hours from a car park in Dover to the port and now been sat in a lane for 1 hour while other lanes have emptied multiple times. Shocking guys. pic.twitter.com/7xQjPK0aIv

The Port of Dover said in a statement that for several months they had “worked so hard in good faith” with their partners and the government to be prepared for the summer.

The statement added, “We are deeply frustrated that the resource at the French border overnight and early this morning has been woefully inadequate to meet our predicted demand.”

@dfds_uk @DFDSUKUpdates I'm booked onto 8am ferry from Dover and it's total gridlock. Moved 50 metres per hour. At this rate it'll be 34 hours before I get to the port! I have a screaming toddler and 3 month old. Can you confirm you'll put us on the next boat, whenever that is?

Officials at Dover had “shared traffic volumes in granular detail with the French authorities in order that these volumes can be matched by adequate border resource.

“We know that resource is finite, but the popularity of Dover is not a surprise.

“Regrettably, the Police Aux Frontieres (PAF) resource has been insufficient and has fallen far short of what is required to ensure a smooth first weekend of the peak summer getaway period.”

Previously the MP for Dover and Deal, Natalie Elphicke, said it is “concerning” that half-term holiday traffic has once again brought chaos.

She said, “It is concerning that the half-term holiday getaway brings traffic chaos to Dover once more.

“I remain in frequent contact with the Kent Resilience Forum and Transport Ministers to Keep Dover Clear.

“It’s vital that there is a review of National Highways’ current sticking plaster approach – which increasingly doesn’t work for Dover, Kent or the UK as a whole.”