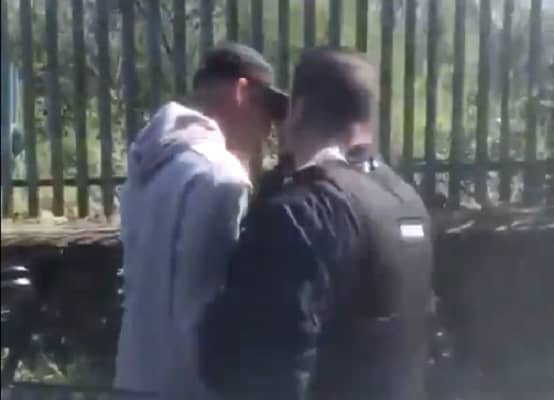 Watch: Bent police officer threatens ‘I’ll make something up’ to arrest a man

A bent police officer has been caught on video threatening to “make something up” after being questioned over his intent to arrest a man who said, “I’ve done nothing wrong.”

The shocking footage shows a police officer squaring up to a man inches from his nose telling him “who are they going to believe” as he threatened to arrest him.

The man repeatedly told the officer that he had “done nothing wrong” and then, astonishingly the police officer told the man I will “make something up.”

The disgusting and unlawful threat had forced Lancashire Police to issue an apology on Saturday morning.

The man involved was spotted in his car on Friday afternoon in Accrington and it is understood he was going to buy a quad bike for his step-son, as he was pulled over by police.

The police officer could clearly be seen intimidating the man shouting at him and squaring up to him, in an aggressive manner.

Boy says “I have done nothing wrong”

Police “I will make something up. Who are they going to believe, me or you”

The man could clearly be heard in a calm manner saying, “You’re harassing me. What for? I’ve done nothing wrong.”

The bent officer can then be heard saying, “Do you want me to show you the definition of harassment?

The man repeats his innocence and insists “I’ve done nothing wrong”, the so called officer responds, “I will make something up.

“Public order, squaring up to a police officer, shall I do that?

Lancashire police tweeted, “We are already aware of footage circulating on social media regarding an officer’s actions during an incident in Accrington yesterday.

“The matter is being investigated and has been referred to our professional standards department.

“It is clear from the footage the member of the public deserves an apology which we will attempt to provide him with today.”