Home Business News Wallace confirms Ukrainian soldiers have arrived in the UK for military training whereby the British Army will train up to 10,000 troops 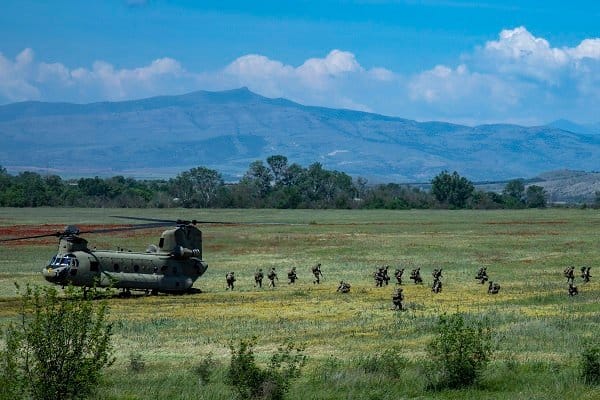 Wallace confirms Ukrainian soldiers have arrived in the UK for military training whereby the British Army will train up to 10,000 troops

The British Defense Secretary Ben Wallace has confirmed on Wednesday that The first Ukrainian soldiers have arrived in the UK for military training.

The Ukrainian soldiers will be based in military training areas across the UK and will learn basic soldier training which will include weapons training patrol tactics.

Wallace said that they are in discussions with international partners to broaden the involvement in a training programme.

The British Defence Secretary said in a written statement, “The first rotation of Ukrainian soldiers has recently arrived in the UK.

“Training will take place on military training areas across the north-east, south-west and south-east regions.

“The training will be conducted by elements from 11 Security Force Assistance Brigade.”

Wallace confirmed that the Ukrainian soldiers will undertake courses based on the UK’s basic soldier training.

This will include weapons training, battlefield first aid, fieldcraft, patrol tactics and training on the law of armed conflict which will last for several months.

Wallace said, “Our ambition is to increase the scale and frequency of these courses, in line with Ukrainian requirements.

“We are also discussing with international partners options to broaden involvement in the training programme, working constructively with countries prepared to support either by contributing trainers or providing equipment.”

The Minister said that in response to Russia’s illegal invasion of Ukraine, the British government are providing the Ukraine with military assistance in the amount of £2.3 billion.

This includes a commitment to lead an innovative program that aims to train up to 10,000 Ukrainian recruits in the UK.