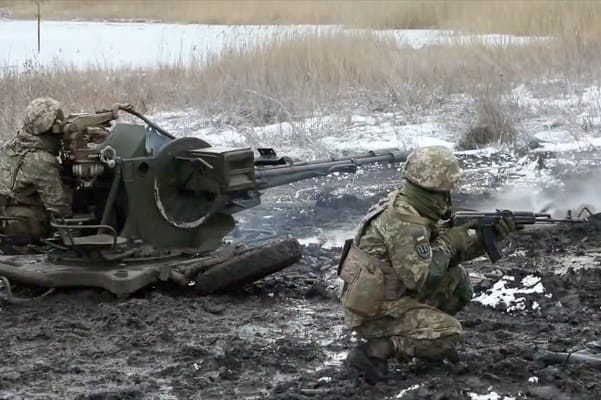 Wagner boss Yevgenny Prigozhin mercenaries are now “likely in control” of the salt mining town of Soledar which has 125 miles of underground tunnels.

Prigozhin has hinted that he could turn the tunnels into a huge makeshift base for thousands of his troops and Vladimir Putin’s forces.

Russian drone footage shows Ukrainian troops withdrawing from their positions in the town as Moscow’s troops are closing in and encircling the town of Soledar.

Soledar is approximately seven miles from Bakhmut which provides protection to the south-west and Ukrainian positions have endured horrific casualties.

Bakhmut has been described as the “Bakhmut meatgrinder” and should Russian forces take control this could open up the Ukrainian line of defence to the Russians.

The British Ministry of Defence has acknowledged that Russian forces, including Wagner mercenaries, were “likely in control of most” of salt mining town of Soledar.

The war in Ukraine is seeing some the fiercest fighting to date as Russia has thrown a “large number of storm groups” in the battlefield and there is “almost no life left.”

Moscow has been accused of using “scorched earth tactics” and the Kyiv appointed governor in Donetsk said that Putin is waging a war which has no rules.

‼️🇺🇦🇷🇺 #Ukrainian troops are trying to leave the #Soledar area by any means, they desperately try different routes but they can't hide

The whole area is been monitored by #Wagner drone operators, the trap is closed, there is no way out. #Russia pic.twitter.com/BKq6DRMCHj

The Ukrainian Deputy Defence Minister Hanna Malyar, said on Tuesday, Russia are throwing “a large number of storm groups” into the battlefield in the Donetsk region.