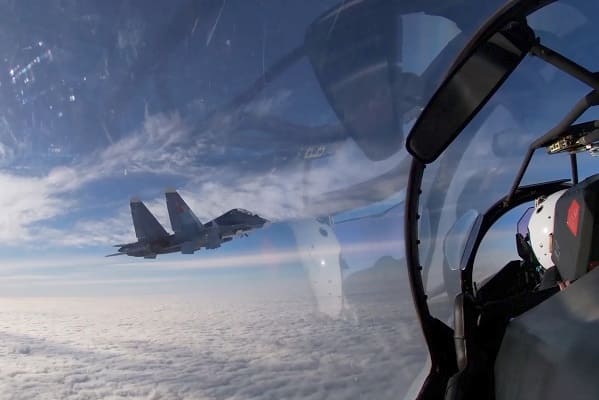 British intelligence has suggested that they believe the formation of thousands of Russian troops, fighter jets and attack helicopters in Belarus is “Likely [a] genuine exercise.”

British intelligence do not believe that Russia and Belarus are preparing “any additional offensive operations against Ukraine.”

The British Ministry of Defence (MoD) said that despite the large deployment of Russian aircraft in Belarus near to the Ukrainian border, this “is likely a genuine exercise, rather than a preparation for any additional offensive operations against Ukraine.”

Military helicopters have arrived at the Machulishchy air base near to Minsk, with “some appearing with ‘Z’ markings” which have been used by Moscow’s forces in Ukraine.

“As of January 8, 2023, amateur aircraft spotters noted the arrival of total of 12 Mi-8 support helicopters and Mi-24 and Ka-52 attack helicopters.

“With some appearing with ‘Z’ markings, the aircraft landed at Machulishchy Air Base near Minsk.

“The new deployment of Russian aircraft to Belarus is likely a genuine exercise, rather than a preparation for any additional offensive operations against Ukraine.

“Although Russia maintains a large number of forces in Belarus, they are mostly involved in training. They are unlikely to constitute a credible offensive force.”

The Belarusian Ministry of Defence said on Monday that the aircraft touched down ahead of a 16-day joint military exercise with Russia.

The Hajun Project reported that over the past two days “at least 1,500 soldiers” have arrived in Belarus.

They added, that on 6 January, “Three echelons with equipment of the Russian Armed Forces have arrived in Belarus during the day,” at the Palonka railway station in the Baranavichy district, Brest region.

The Belarussian Ministry of Defence said in a statement, “From January 16 to February 1, 2023, a joint tactical flight exercise will be held with the aviation units of the armed forces of the Republic of Belarus and the Russian Federation, which are part of the aviation component of the RGV (s).

“Today, an aviation component from the Military Space Forces of the Armed Forces of the Russian Federation arrived in the Republic of Belarus.

“During the tactical flight exercise, all airfields and training grounds of the Air Force and Air Defense Forces of the Armed Forces of Belarus will be involved.”