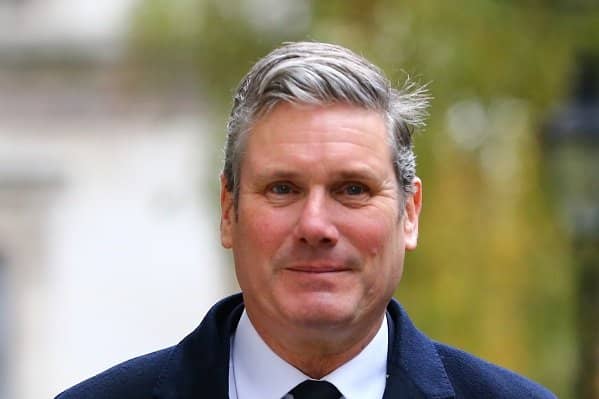 The Labour leader Sir Keir Starmer and the Shadow Foreign Secretary David Lammy were rescued by police on Monday evening after a mob shouted false claims about Jimmy Savile.

The mob of protestors and anti-vaxxers falsely accused Sir Keir of “protecting” the paedophile and shouted “traitor.”

Police were forced to step in and walked Starmer and Lammy to a police car as protestors could be heard swearing and shouting “were you protecting Jimmy Savile.”

NEW: Shouts of "Traitor [to the working class]" as UK police try to protect Israel-linked Julian Assange persecutor, Sir Keir Starmer who as Labour leader has thrown out Jeremy Corbyn from the party in Westminster. pic.twitter.com/JVmcevdcTB

Smith tweeted, “What happened to Keir Starmer tonight outside parliament is appalling.

“It is really important for our democracy and for his security that the false Savile slurs made against him are withdrawn in full.”

The Metropolitan Police said that two people were arrested on suspicion of assualting a police officer.

Tobias Ellwood echoed Smith’s plea saying, “PM- apologise please. We claim to be the Mother of all Parliaments.

“Let’s stop this drift towards a Trumpian style of politics from becoming the norm. We are better than this.”

“I keep thinking about Keir & David’s families & friends. But these things don’t just happen. Words have consequences, leaders have a duty to behave responsibly & politics is not a game.

He said, “This is what happens when a Prime Minister descends into the gutter and recycles lies from hard-right conspiracy theorists. Political poison has an effect.

“Johnson has no moral compass.”

However, Conservative peer Lord Lilley, a former Cabinet Minister, said, “we’re all getting a bit precious about this.”

He told BBC Newsnight, “Both sides are saying the person at the top of the organisation is responsible for what happens further down … both sides should probably apologise and stop making personal remarks.”

The Prime Minister tweeted, “The behaviour directed at the Leader of the Opposition tonight is absolutely disgraceful.

“All forms of harassment of our elected representatives are completely unacceptable. I thank the police for responding swiftly.”