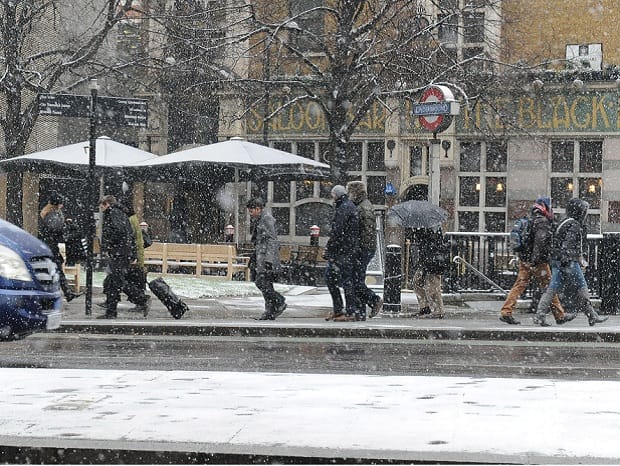 Latest forecasts are predicting that an Arctic freeze is to hit the UK with northerly winds expected to bring heavy snow this Friday.

According to WXCharts there is a 45 to 100% chance of snow hitting the UK including the southern parts of the country this weekend.

Brian Gaze, a forecaster at Weather Outlook, warned that there will be “snow cover extending down to parts of the south this weekend.

“Snow depth charts are often wide of the mark in the UK but it is something to keep an eye on as we head through the week.”

North west of England could see temperatures of 4C, with London and the south going into single digits as low as 1C.

Gaze said, “Another Arctic blast is expected to sweep southwards again during Friday, with the risk of snow and sharp frosts returning to much of the country this weekend.

“Wednesday begins very cold with temperatures below freezing point in much of the UK. There are wintry showers in the north and around coastal counties.

“Through the day they fade away and many areas have sunny periods. Cloudier skies push into parts of the north west and outbreaks of rain develop in Northern Ireland. It remains cold for the time of year, but winds will be lighter than in recent days.

“Maximum temperatures range from 3C (37F) in northern Scotland to 9C (48F) in the south. See the rain radar for the latest view.

“Through Friday patchy spells of rain move down into southern counties and they could turn to sleet or snow on their back edge. To the north very cold Arctic air returns and showers increasingly fall as snow to low levels.

“Current guidance is suggesting a cold weekend. Sleet or snow showers may be widespread and heavy on Saturday in central and northern areas. In the south there could be longer spells of rain, sleet and snow.

“Sunday perhaps brings outbreaks of rain, sleet and snow to Scotland. Elsewhere showers fade away to leave dry conditions. There is the potential for sharp or even severe nighttime frosts.

“Early next week temperatures are expected to gradually edge upwards. There should be a good deal of dry weather but showers or longer spells of rain are possible and in the north it could be cold enough for snow. The risk of frost continues.”