Home Business News Russian troops slam the war saying ‘they sent us to death, the whole f***ing battalion’ and mothers are now rising up against Putin 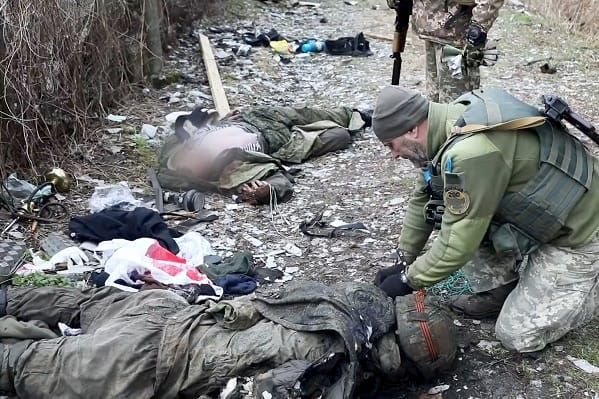 Valentina Melnikova, who runs the Committee of Soldiers’ Mothers in Russia, revealed that even the relatives of the soldiers hear nothing about their fate.

She told Sky News: “The families aren’t told where they’ve gone missing or the circumstances.

“‘Very rarely, some of them manage to drag out of the people they served with, details about what actually happened.”

In an interview with Meduza in May, Melnikova said, “We have no idea how many bodies Russian military units haven’t retrieved and haven’t buried.

“It’s a problem we need to reckon with. There’s never been anything like it before.”

She added, “When a soldier dies and they take his body to Rostov, identify him with a DNA test, and find his relatives, that’s a terrible sorrow, but at least there’s a conclusion.

“There’s a death certificate, the body can be buried, and the family can receive insurance payments.

“Helping the relatives of missing soldiers is harder. There’s no information and no documents.

“Three months have passed since the war began, but this problem still hasn’t been recognised by the state in any way. It’s unclear what ‘missing’ even means.

“There’s currently no decent legal support for the families of missing soldiers, even those who are married or have children.”

A captured Russian trooper in Ukraine had told his mother, “They sent us to death, the whole fucking battalion.

“Everybody was killed… They don’t even take away the bodies.”

He then warned his mother not to make too much trouble back home, he said, “If you start making a lot of noise the FSB [the Russian internal security agency] will be after you.”

A Russian soldier’s mum who hasn’t heard of her son said, “They were withdrawing and there was a battle.”

She added, “My son was killed. They couldn’t retrieve the bodies, there were a lot of them there. Locals buried them.”

Irina Chistyakova, whose 19-year-old son went missing four months ago, said: “No one hears us and no one wants to listen to us.

“My son went missing in Kharkiv region, so explain to me, why was my son there?”

Another captured Russian soldier said his commander refused to tell the soldiers where the unit was going.

Another soldier said, “I didn’t know we were going to Ukraine, I was tricked.

“We were deceived and used like a meat shield,” says yet another, according to the translation provided in the clip.”

“We acted like Nazis. We attacked people here, so they were forced to defend their territory,” the soldier added.

“Everything they say to us is bullshit… I just don’t understand why we were told all this crap in Russia.

“We have been fucking left here just like pigs.”