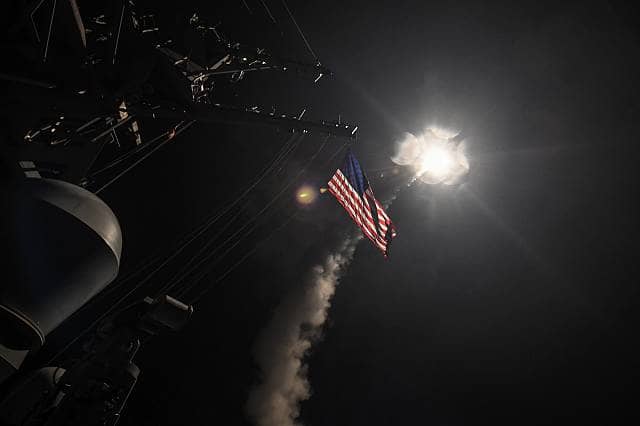 Russia, Iran and Hezbollah, the Lebanese militant group have sent a direct warning to President Donald Trump and have said last week’s airstrikes crossed a “red line” and any further action will have direct retaliation.

Iran’s leader Hassan Rouhani and Russian President Vladimir Putin said in telephone talks that US military intervention in Syria was a “violation of international law.” Hezbollah also issued a statement vowing to “reply with force” to any US aggression “in a variety of ways” should the US attack again.

Foreign secretary Boris Johnson cancelled Monday’s meeting in Moscow and has instead focussed his efforts on G7 in Italy.

Johnson told The Sun that Trump has shown “a resolve and willingness that has been sadly missing in the last few years.” Johnson warned that the US may strike again in Syria adding: “We cannot miss this moment. It is time for Putin to face the truth about the tyrant he is still propping up.”

Johnson has been slammed for cancelling planned talks with Russian counterpart Sergey Lavrov with people saying he looks “daft” and he “can’t be trusted.”

A British government source came out and said: “The important thing is that this is Britain helping to influence US policy on Syria and Russia, far from being a poodle.”

“Three months ago, Syria wasn’t really an issue for them but our push and recent events have made a difference.”

Sir Michael Fallon the British defence secretary said yesterday that Russia is responsible for “every civilian death” from the chemical weapons attack last Tuesday in Syria.

Rex Tillerson the US secretary of state will continue with this week’s visit to the Kremlin. Tillerson said on CBS that the Russians “have played now for some time the role of providing cover for Bashar Assad’s behaviour,” and failing to rid Syria of stockpiles of weapons “has led to the killing of more children and innocents.”

Tillerson was asked if the US would have any further intervention in Syria, he replied with, Washington’s “first priority” is to defeat Islamic State.

“Once the Isis threat has been reduced or eliminated, I think we can turn our attention directly to stabilising the situation in Syria.”