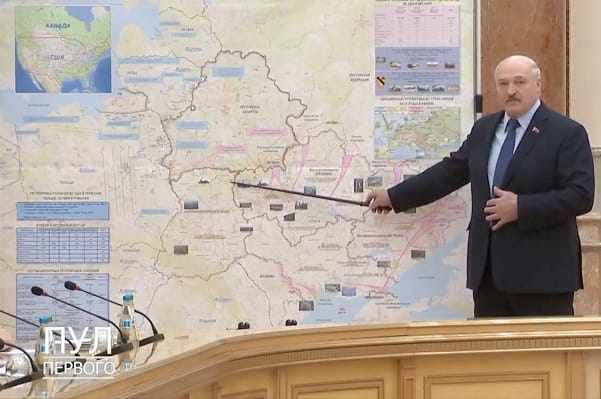 Vladimir Putin has savaged the Belarusian President calling him “stupid” then despot Alexander Lukashenko broke down in tears after being pressured to join the “special operation” in Ukraine.

The General SVR Telegram channel which is run by an insider of the Kremlin said there was a very heated rage from Putin towards Lukashenko, where it was reported it did “not go as smoothly as it might appear.”

General SVR added, “According to eyewitnesses, the threat was uttered so convincingly and loudly that it was heard by the people waiting for the end of the negotiations, of which there were about a dozen, and the guards, and Lukashenko himself.”

Cry baby Lukashenko begged Putin to keep communications open and the President of Belarus then promised the Russian leader that Belarusian troops will join the “special operation” and will fight with Russia against the Ukraine.

Belarus has sent around 20 rail carriages filled with ammunition for Russian forces as President Lukashenko continues to support the Putin with military support.

The general staff of the Armed Forces of Ukraine said, in a post on Facebook, “”No signs of the enemy forming offensive groups have been recorded in the Volyn and Polissia areas.

“According to available information, the leadership of the Republic of Belarus continues to provide military support to the Russian Federation.

“In particular, another consignment of ammunition of up to 20 railcars has been sent to the Belgorod region.”

Western military experts have said that Russian forces are “running low on ammunition” which could soon cripple the Kremlin.

An official told the Washington Post, “There will come a time when the tiny advances Russia is making become unsustainable in light of the costs and they will need a significant pause to regenerate capability.”