CLICK HERE TO WATCH THE FULL VIDEO
Home Business News Omicron R number could be above 4 and ‘to save Christmas limit contact to three households,’ says Sturgeon 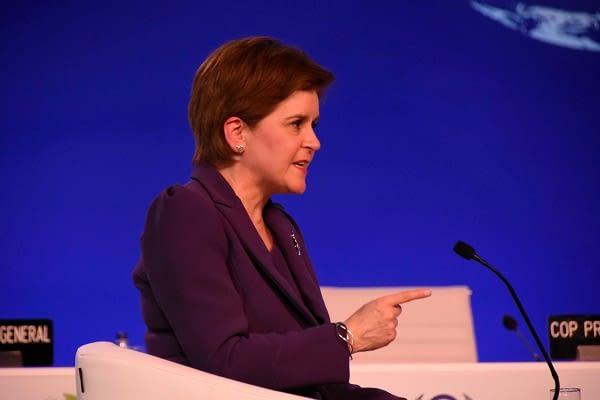 Omicron R number could be above 4 and ‘to save Christmas limit contact to three households,’ says Sturgeon

Scotland’s First Minister Nicola Strugeon has held her weekly update over the situation in her country and warned the R number for Omicron “appears to by two and is possibly above four.”

Speaking at Holyrood Sturgeon said that Omicron is “significantly more transmissible” than the Delta variant.

Sturgeon added, “In recent months the proportion of Delta cases needing hospital care is around 2%.

“If cases rise significantly to say 10,000 a day… and this is well within the model estimates… then even if the hospitalisation turned out to be half that of Delta’s at 1% we would see 700 hospitalisations a week.”

She said that two people have been hospitalised with Omicron in Scotland, but said the actual number is likely to be higher.

She said that there has been six deaths and 38 people are in intensive care units with Covid.

She said, “Our current assessment is that it is spreading very rapidly in Scotland.”

She advised of new measures in Scotland to tackle the rapid spread of Omicron and is asking Scots to “reduce as far as possible contact with other households” over the next couple of weeks.

Sturgeon insisted that she is not “asking anyone to cancel Christmas,” but is asking people to be careful and try to reduce contact with others.

She said, She said: “I want to be clear, I am not asking anyone to cancel Christmas but in the run up to and in the aftermath I am asking people to reduce contact.

“We are not banning household mixing in law… but we are asking everyone to cut down as far as possible the number of people outside their households they are interacting with as of now.

“Please minimise social mixing with other households as much as possible.

“We ask that you limit the number of households to three, and make sure you test before you go.”

She spoke about Christmas Day and told Holyrood, “We are not asking you to cancel or change your plans and we are not proposing limits on the size of gatherings.

“But we will issue guidance to make Christmas safer.”

“I would not be doing so if I didn’t believe it was absolutely necessary,” Sturgeon added.