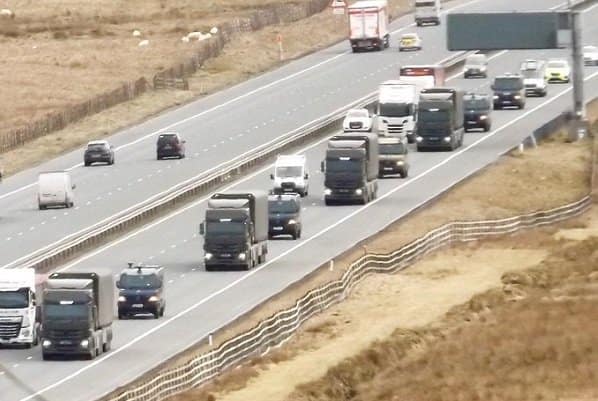 It has been claimed that the Ministry of Defence (MoD) have transported nuclear weapons in a convoy on a UK motorway with a police escort.

An unmarked military convoy was spotted driving through parts of Cumbria and Lancashire with a photo taken of them driving on the M55.

Disarmament organisation Campaign of Nuclear Disarmament (CND) said the trucks were carrying nuclear weapons as their tracker suggested that Trident missiles were on board the convoy of military trucks.

The Trident programme which arms a certain type of submarine are mainly in Scotland which acts as the UK’s nuclear deterrent.

CND spokesperson Philip Gilligan has said the military convoys are “increasing frequency” and could be affecting those who live in and around the areas.

Speaking to Lancashire Live Gilligan said, “These very dangerous convoys seem to be carrying nuclear warheads past our homes, schools and hospitals with ever-increasing frequency.

“At the same time, those of us who are most likely to be affected by an accident involving one are given little, if any, information about when they will pass our homes or about the specific dangers involved.”

Gilligan added, “At a minimum, we need to know, if, and exactly how, we can begin to protect ourselves and our children from the alpha-emitting plutonium and uranium particles which could be dispersed if an explosion resulted from an accident involving one of these MoD carriers?

“Better still, these the convoys should be taken off our roads altogether.

“We do not need nuclear missiles, and we would all be much safer without them on our roads.”

Russia has repeatedly threatened nuclear war on the UK and have recently threatened the first nuclear missile will strike London first.

A foreign policy expert and former aide to Margaret Thatcher has warned Vladimir Putin that if launches nuclear weapons on the West it “would be the end of Russia.”

Putin is very desperate and there are real fears that he is plotting revenge and he could launch nuclear weapons to win the war in Ukraine.

Thatcher’s former aide Nile Gardiner previously told the Express.co.uk, “The reality is the use of nuclear weapons by Russia would be the end of Russia, and they know that.

“This has been the state of affairs since World War Two, and every Russian leader since then understands Russia making the first move with a nuclear strike would be the end of Russia.

“Even the UK on its own has the ability to cripple Russia with its nuclear arsenal, let alone what the US has at its disposal.”