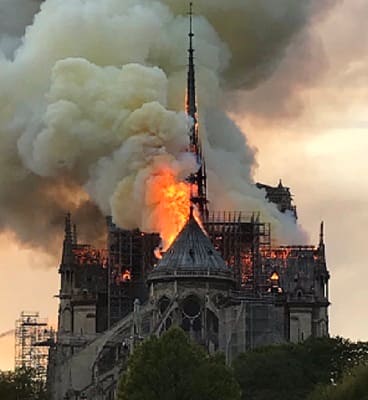 Notre Dame Cathedral is on fire in Paris

Fire has broken out at the world-famous medieval Notre Dame cathedral in Paris on Monday afternoon at around 6pm, firefighters say.

Fire and heavy smoke can be seen billowing from the 850-year old Gothic building, people have taken to social media posting videos of the fire.

#NotreDame – The roof has completely collapsed. So tragic. pic.twitter.com/wXyuexniWz

The cause of the fire is unknown at this time and a major operation is under way, officials have said the immediate areas has been cleared for safety precautions.

Anne Hidalgo, the mayor of Paris said it is a “terrible fire” and asked people to respect the boundaries in place by the fire service.

Emmanuel Macron the French president has cancelled a television speech planned for this evening after hearing the news of Notre Dame.

The iconic 12th century cathedral was having renovations being undertaken, pictures on social media show scaffolding surrounding parts of the building.

Social media shows that the roof has almost collapsed, and the spire towards the back of the cathedral has collasped into the roof.

Meanwhile, President Donald Trump has tweeted suggesting that “perhaps flying water tankers could be used to put it out.”

So horrible to watch the massive fire at Notre Dame Cathedral in Paris. Perhaps flying water tankers could be used to put it out. Must act quickly!

The cathedral was forced to have renovations as cracks had appeared within the stone, creating fears the building could collapse started renovations.