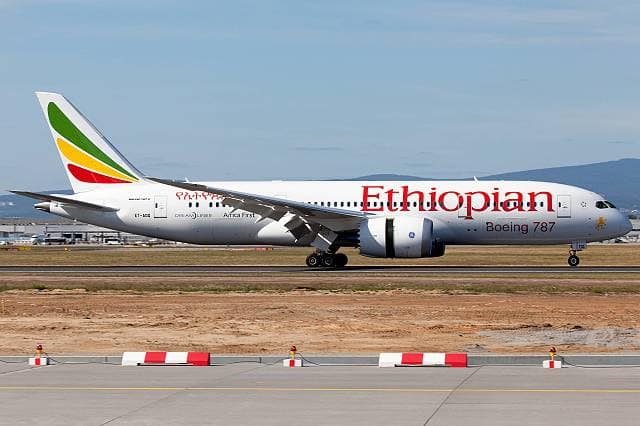 ‘No survivors’ as Ethiopian Airlines plane crashes near Addis Ababa

According to State run Ethiopian Broadcasting Corporation, all 157 people on board Ethiopian Airlines flight ET 302 have been killed.

The Boeing 737 MAX 8 was carrying 149 passengers and eight crew, the flight crashed six minutes after taking off from the Ethiopian capital, Addis Ababa.

Ethiopian Airlines said in a statement they “deeply regrets the fatal accident.”

the airline added, “The group CEO who is at the accident scene right now regrets to confirm that there are no survivors.

“He expresses his profound sympathy and condolences to the families and loved ones of passengers and crew who lost their lives in this tragic accident.”

Abiy Ahmed the prime minister of Ethiopia said on Twitter: “The office of the PM, on behalf of government and people of Ethiopia, would like to express it’s deepest condolences to the families that have lost their loved ones on Ethiopian Airlines Boeing 737 on regular scheduled flight to Nairobi, Kenya this morning.”

The Office of the PM, on behalf of the Government and people of Ethiopia, would like to express it’s deepest condolences to the families of those that have lost their loved ones on Ethiopian Airlines Boeing 737 on regular scheduled flight to Nairobi, Kenya this morning.

Tewolde Gebremariam, Ethiopian Airline chief expressed his “profound sympathy and condolences” to those loved ones who have lost family and firends, he confirmed there were no survivors.

The Boeing aircraft took off from Bole International Airport in the Ethiopian capital at 8:38am local time on Sunday morning bound for Nairobi, Kenya.

According to Flightradar24, a flight tracking website said the Boeing 737 “had an unstable vertical speed” after taking off.

However, it is not clear as to what caused the accident.

Uhuru Kenyatta, Kenya’s president said, “My prayers go to all the families and associates of those on board.”

American owned Boeing said they are “closely monitoring the situation.”

Boeing said in a statement, “We extend our heartfelt sympathies to the families and loved ones of the passengers and crew on board and stand ready to support the Ethiopian Airlines team.

“A Boeing technical team is prepared to provide technical assistance at the request and under the direction of the US National Transportation Safety Board.”

The Boeing 737 MAX 8 was launched by Boeing in 2016, Ethiopian Airlines added this airframe to their fleet in July last year. The crashed aircraft took its first flight with the Ethiopian Airline at the end of October 2018.

Five months ago, another Boeing 737 MAX 8 aircraft owned by Lion Air, flight JT 610 crashed in to the ocean near to Indonesia killing 189 people on board.

Boeing issued a warning to airlines using the 737 MAX 8 planes as sensor failure was to blame, and potentially the cause of the crash of flight JT 610.

Ethiopian Airlines is the largest carrier in Africa with a good safety record and is a Star Alliance member, the airline is government owned.

Most of the Ethiopian’s aircraft are new, the Boeing 737 is brand new and took its first flight end of October 2018.

In 2010 an Ethiopian Airlines plane crashed in to the Mediterranean Sea shortly after taking off from Beirut International Airport in Lebanon, killing 90 people.

In November 1996 the airline crashed during a hijacking, on a flight from Addis Ababa to Nairobi after an engine stopped when the fuel ran out.

The hijacked plane attempted an emergency landing on water, the plane hit a coral reef in the Indian Ocean and 123 of the 175 passengers were killed.