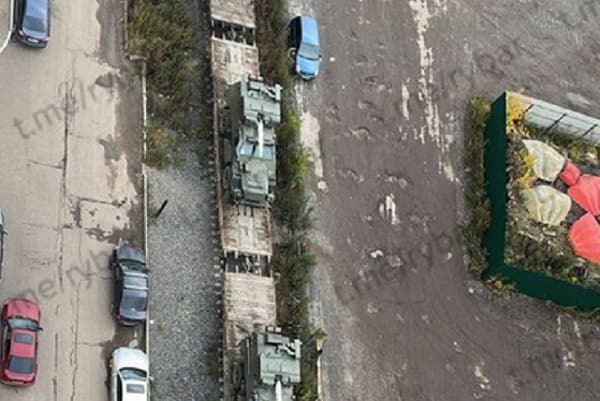 A specialist Russian division which is dedicated to maintaining nuclear weapons has been spotted on the move and military analysts have concerns this could be a sign of an escalation in Ukraine.

The train has been seen transporting military equipment which is associated with the nuclear arms division as the 12th Main Directorate of the Russian Ministry of Defence.

NATO has also warned the Belgorod which is a Russian nuclear submarine has left it’s base in the White Sea in the Arctic Circle which is capable of carrying the Poseidon doomsday weapon.

The Poseidon is a specially designed underwater drone which is capable of creating a 1,600ft nuclear tsunami which would wipe away coastal cities.

NATO has warned that the 600ft Belgorod submarine could be about to undertake a nuclear test using the Poseidon nuclear weapon in the Kara Sea.

The Kara Sea is off the eastern coast of Novaya Zemlya which is an island controlled by Moscow.

The train carrying nuclear military equipment has a series of BPM-97 armoured personnel carriers (APC) which have upgraded turrets.

The APC’s have also been reinforced ambush and mine proof armour with air purification systems which is effective against radiation, and such advanced equipment has not been seen on the frontline in Ukraine.

The train was seen travelling through central Russia and was reported the pro-Russian channel Rybar.

Military analyst Konrad Musyka warned the deployment of these units could signal the start of an escalation of, which could be a precursor to large scale nuclear exercises.

Muzyka said the train is part of a unit which operates a dozen central storage facilities for nuclear and tactical low-yield weapons.

At first glance, there is nothing special about it. But a closer look reveals the KamAZ-43269 "Vystrel" with "Spitsa" combat modules standing on the platforms. They are equipped with a 30-mm 2A42 gun, PKT machine gun and automatic AG-30 grenade launcher. pic.twitter.com/gGMM6Ipfpo

He said, “This is actually carrying kit belonging to the 12th Main Directorate of the Russian MoD.

However, this does not mean the Kremlin is preparing a nuclear strike but is does suggest that this is a “signal to the West that Moscow is escalating” tensions.

However, he said this is significant that it emerged after Ukraine warned of the “very high” risk of Russia using a tactical nuclear weapon.

“It could be a form of signalling to the West that Moscow is escalating,” Muzyka said, in reference to Putin’s nuclear war warning on Friday.

Vasily Kashin, a military and political analyst at the Higher School of Economics in Moscow said, “We’re in a situation in which superiority in resources and conventional weaponry is on the side of the West.

“But Russia’s power is based on its nuclear arsenal.”