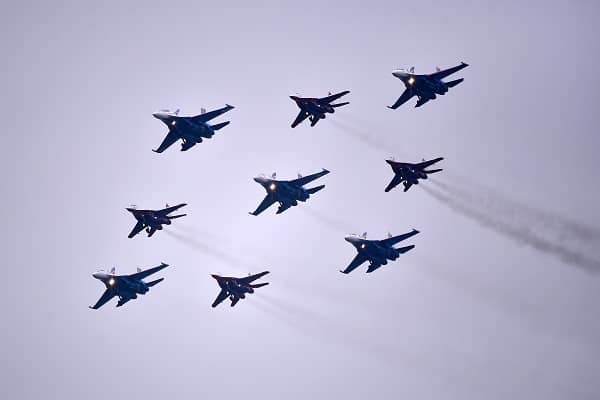 The despot leader of Russia Vladimir Putin has launched a full scale invasion on Ukraine which has seen Russian bombers and fighter jets flying over the country and cruise missiles have been fired.

Europe is on the verge of an all out war as Putin claims the military operation is aimed at the “demilitarisation and denazification” of Ukraine.

VIDEO: A Barrage launch of missiles from Russian aimed towards Ukraine 🥺

Hundreds of explosions have rocked Ukraine and there has been explosions heard in major cities including the capital Kyiv.

“Peaceful Ukrainian cities are under strikes.

“This is a war of aggression. Ukraine will defend itself and will win. The world can and must stop Putin. The time to act is now.”

Putin started the war at 5am on Thursday which has targeted airports, military airfields, factories and main supply routes.

The western defence alliance has said NATO is “deploying additional defensive land and air forces to the eastern part of the Alliance, as well as additional maritime assets,” following consultations under Article 4 of the treaty.

It added, “We have increased the readiness of our forces to respond to all contingencies.”

Estonia, Latvia, Lithuania and Poland have all triggered rare consultations under Article 4 of Nato’s treaty.

Once “the territorial integrity, political independence or security of any of the (NATO) parties is threatened,” then this will be launched immediately.

In a statement, the NATO envoys said, ‘We have decided, in line with our defensive planning to protect all allies, to take additional steps to further strengthen deterrence and defence across the alliance.

“Our measures are and remain preventive, proportionate and non-escalatory.”

The British Prime Minister Boris Johnson has called for an emergency meeting with NATO leaders and he will be speaking with other G7 leaders on Thursday.

Slovak Foreign Minister Ivan Korcok said that NATO is planning to create a battle group which will involve his country which as agreed “to start planning such steps, which are necessary to do for the defence of the alliance and Slovakia.”