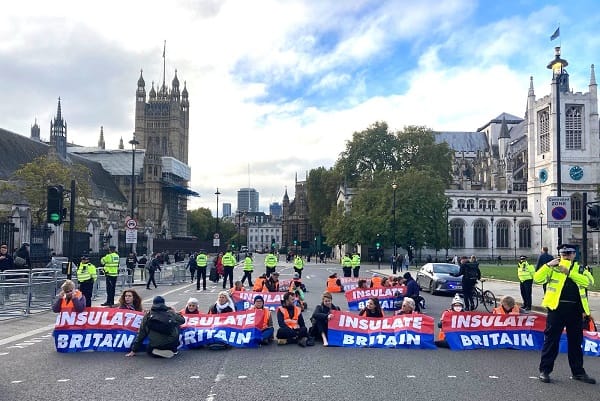 62 Insulate Britain protesters have blocked Parliament Square and glued themselves to the road on Thursday morning.

The group said on Twitter, “62 people have blocked three roads around Parliament Square in Westminster this morning.

“2 groups of people are sitting in the road with banners on Parliament square near the Peers’ entrance to the Houses of Parliament and on Bridge street.”

As of Tuesday the group said there had been 770 arrests and 161 people had taken part in protesting in roads across London the M25, M1 and the M4.

Following a series of demonstrations across the M25, Insulate Britain said the protesters now face a charge of contempt of court where they could face a maximum of two years in prison or even an unlimited fine, which would most likely be paid by the group.

Nine supporters of Insulate Britain have been summoned to appear at the High Court in London on 16 November for breaching the National Highways injunction.

Last month the Prime Minister Boris Johnson slammed Insulate Britain activists and said they are “irresponsible crusties” and are “not” legitimate protestors who are causing “considerable damage to the economy.”

Previously Liam Norton who is a protestor with the group told the court, “I just want to say publicly Insulate Britain are in the process of trying to uphold the law, the UK government has a responsibility to keep temperatures below 2C degrees.

He added, “Boris Johnson should be on trial for treason.”