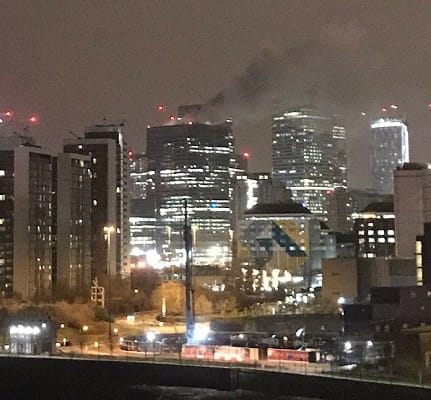 Fire breaks out on top of Barclays building Canary Wharf

In the early hours of Saturday morning smoke was seen billowing over the financial district at Canary Wharf, an air conditioning unit had caught fire on top of the 33 storey Barclays building.

The commercial tower block fire in the #CanaryWharf area is
now under control. The fire was contained to an air conditioning unit which was alight on the roof. https://t.co/yxXLjc0mVO pic.twitter.com/Ckql5rj4Pr

Lee Sandy, station manager said, “While the fire was very visible, it was contained to the air conditioning unit on the roof of a commercial tower block.

“There were no people involved and the fire did not spread beyond the roof area.”

LFB added, “Eight fire engines from stations including, Millwall and Shadwell stations were at the scene.”

The fire was bought under control at around 2am and no injuries were reported.